On Being a "Difficult" Parent

The last time Max had an infusion, one of his inflammation markers was elevated. I've learned that predicting a Crohn's flare up can be a guessing game er, prediction activity involving a slew of lab results and reports of clinical symptoms.

He'd just had an ear infection and ten days on antibiotics, so wonky labs could have been innocuous or a "false positive." It was also one result from a few inflammation markers checked every infusion--and the other numbers were fine. Evidently his GI specialist didn't think so, and through a rather uncomfortable round of "let's play triangulating communication" with me and his nurse a week after those labs, I learned he wanted to move Max to a six week rather than eight week infusion schedule.

Look, I know my kid is sick. He spent nearly five weeks in the hospital last winter before having three surgeries through June. But--and this is pretty crucial--Max hasn't reported a Crohn's symptom since the first surgery liberated him of a very sick colon.

I don't harbor illusions that my child is healed and cured of this disease. We travel to Kansas City for infusions every couple of months (I guess six weeks now) since last January. We make sure he takes his vitamins and anti-anxiety meds. I monitor how much he eats, his exercise--everything. I am not happy that the doctor is changing treatment based on a single lab result one time and the apparent dismissal of my explanation that Max has been symptom free (through the nurse triangulation channel, of course). I certainly am not happy such a thing happens without any examination or discussion with the patient.

In fact, his specialist used the word "intransigent" in an email to the nurse with whom we were triangulating to describe my attitude toward Max's symptoms in the past. Go on, look it up. Google that bad boy. Kind of sounds like an insult, right?

Before Max's hospital marathon, I may have misread some symptoms. I may have not understood the gravity of the disease and how things could spiral quickly. Max also struggles with anxiety, and I know the anxiety contributed to his downward spiral. This is how things happen with chronic diseases as families learn to manage and cope.

Things are different now. He has no colon. I monitor him more closely. He's receiving treatment and therapy to manage the anxiety And he's been doing well.

But now I'm a "difficult" parent. Intransigent. Pig-headed and stubborn and, in his specialist's opinion, blind to what's really going on with Max.

I live with Max. I know what's going on. I know how many times he has a bowel movement every day. I know how he's feeling and what his worries are. I know what math group he's in and the book his reading group is devouring. I know his favorite Pokemon and the name he uses on Minecraft servers. I know he asked for a pill form of Benadryl before his infusions (given before Remicade) and I know the specialist hasn't bothered to change those orders to meet his request since making that request nearly six months ago. I also know that same specialist never had a conversation with Max's surgeon last spring. I know that's not necessarily how medicine works, but I know that's how I work. I know I expect more communication than a couple of phone calls with a nurse and a naughty note about me from the specialist to that nurse. I know I'm frustrated and sometimes mad as hell.

And I know, most of all, I love my son and will advocate for him to the best of my ability,

If that makes me "difficult," bring it on. 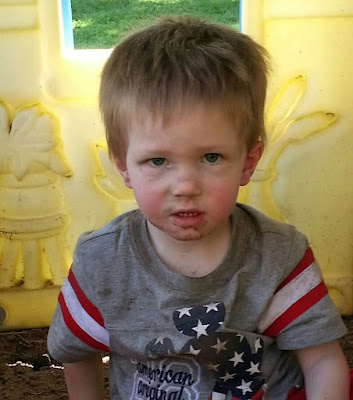