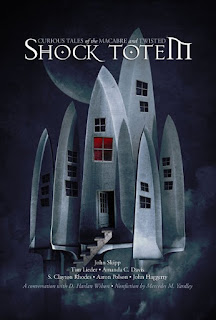 From Joshua Jabcuga (Bookgasm)
"I was genuinely moved by Polson’s entry, one about nostalgia and memories, and as some of us know, these ghosts of what-was or what-can-never-be-again can create the most haunting experiences of our lives, the kind that no amount of beer can drown, no pill can numb, and the type where no amount of distance or time will help us escape from it... horror at its finest."

From Sheila M. Merritt (Hellnotes)
"Facing facts leads to an emotional hurt that lyrically lingers in this lovely and haunting story." 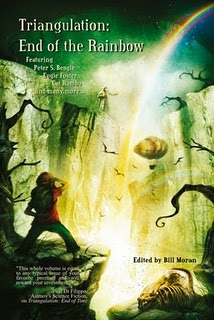 "The World in Rubber, Soft and Malleable" in Triangulation: End of the Rainbow (reprinted from A Fly in Amber)
A storySouth Million Writers Award notable story for 2009


From Geof Willmetts (SF Crowsnest)
"...has a title you have to love. A small town has a population that is slowly vanishing and one of the local graffiti painting teens remaining decides to celebrate their lives. This story wouldn’t have been out of place under the auspices of Ray Bradbury."

From Maggie Jamison (Tangent Online)
"...a modern-day horror story set in the bayou and the Gulf of Mexico after a disastrous flood has drowned hundreds of local people. Elroy Jantz, a boatman who occasionally contracted for shrimp companies, is drafted along with many other small boatmen to retrieve the water-logged bodies from the waters. This was one of the gems of this issue and made for a strong finish. The imagery is dark, but unique, and the development of the reader’s understanding of Elroy’s past is revealed carefully, without stunting the pace of the story." 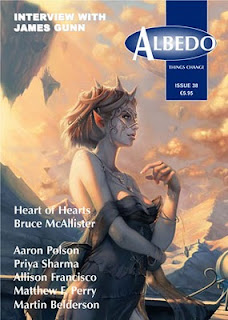 "Precious Metal" in Albedo One #38

From Gareth D. Jones (SF Crowsnest)
"Aaron Polson's short and touching tale...set in post-collapse future where an old man scavenges precious metals to pay off the local gang.  He uses his skills in metalworking for something far more valuable and creates a wonderfully poignant existence."

From Colin Harvey (Suite101.com)
"...arguably the best of the stories, a short-short about an old man in a junkyard building mechanical birds and animals from scrap after an unnamed apocalypse, the gangsters who threaten him, and a clockwork crow which has an odd fairytale quality to it. Brief yet poignant, and outstanding."

From Dave Truesdale (Tangent Online)
"...though reminiscent of the devotion flesh and blood animals feel for their owners/masters (especially dogs), this—for want of a better description—"emotional vignette" achieves its purpose. The final image is well drawn." 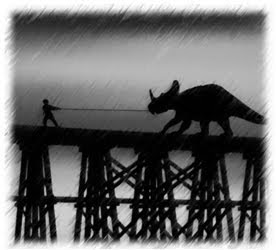 "To Put Away Childish Things" - Kaleidotrope #7

From Sam Tomaino of SFRevu:
"In 'To Put Away Childish Things', Aaron A. Polson, Santiago builds a cyborg son to replace his human one taken from him. But the child learns the wrong lessons in this tale with a nice turn at the end."

From Tangent Online (KJ Hannah Greenberg):
"'To Put Away Childish Things' provides some remarkable observations about the nature of humanity..."

"Dancing Lessons" - Triangulation: Dark Glass
Included in Tangent Online's Recommended Reading list for 2009
From Tangent Online (Nathan Goldman):
"...keeps the reader engulfed in the story with vivid description, characters to care about, and the sharpest prose in the collection."

From SF Crowsnest:
"The connotation of 'Dark Glass' had several writers looking more towards fantasy, gods and reincarnation. Although well-written these didn't hold up as well as Arron [sic] Polson's very short story, 'Dancing Lessons', where a small girl briefly aids a resurrected hobo who was temporarily augmented as his body started to fail..." 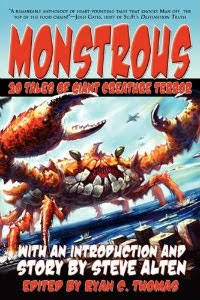 "A Plague from the Mud" - Monstrous

From Horror World:
"...this one will keep you out of the woods for a long time..."

From Fatally-Yours:
"Monstrous is a delight to read, combining the nostalgia of ’50s giant creature movies with modern-day science, storytelling and twists..."

From Horror Drive-In:
"I had never heard of Aaron Polson before I picked up Monstrous, but I was most impressed with his entry, 'A Plague from the Mud'. It captures the personality of a small town in the grip of mounting terror quite well."

From The Horror Mall:
"'Crabs' by Guy Smith, Aaron Polson's 'Plague from the Mud', and Towler's 'Scales' are all standout, action-pumping suspense."