I heard a story once, and whether it is real or not is irrelevant. It's true, and that's all that matters. A college freshman (smart guy, 30+ on the ACT, gifted program in high school, etc.) went to his first final of his first semester with a pencil. This was twenty-some-odd years ago when pencils held a little more relevancy.

He surprised his roommate by returning ten minutes after the test started.

Smart Guy: (holds up broken pencil) My pencil broke, so I quit.

Astonished? The first time I heard the story, I nodded with understanding. The smart guy had been a good friend of mine in high school, so I knew school wasn't really his thing regardless of IQ score. The story really isn't about pencils or college or intelligence or even truth. The story tells us about resilience--or the lack of it.

Resilience goes by many other names: grit or determination or willpower or being "scrappy." It's the ability to stick with something when roadblocks mount in front of you. It's what helps you over, under, through, or around those roadblocks so you can keep going. It's how you answer the big questions in life, like:

What are you going to do when your pencil breaks?

I taught English in a small northeast Kansas high school for thirteen years. Pencils, or the lack of them, were a common theme. Some students marched into class sans pencil (or other writing utensil) like the Light Brigade rode into the valley of Death, banners flying. Some students sulked into class without a pencil and tried their best Harry Potter with invisibility cloak impression in the back of the room. A student without a pencil is like a carpenter without a hammer, at least "way back" then. A former colleague would engage in a five to ten minute verbal sparring match with some of these kids as if yelling at them would make pencils magically appear.

Because they won't. Not most of the time, anyway.

I worry about my own kids all the time. Owen, my 8th grader, has decided not to use the pencils I bought for him at the start of the year. He has made it his goal to find pencils on the ground at school and use those instead. He has all year. Am I mad? Worried? No. I consider it training for a day when he's going to need to be resourceful--for that day when a roadblock arrives and he must conquer it. Pencils are fragile and sometimes forgotten. We all need the ability to keep going.

So what will you do if your pencil breaks? 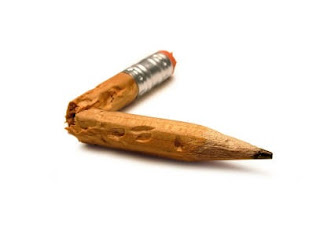 Email ThisBlogThis!Share to TwitterShare to FacebookShare to Pinterest
Labels: It's not about you., resilience, Rule #1, thoughts on life

There must be some sort of metaphor for the pencil that keeps losing a newly sharpened lead after three or four strokes. I was never sure whether to blame it on the dollar store pencils or the dollar store electric pencil sharpener in my classroom...

And if you run out of pencils, call me. I got your back.

Cheap pencils are the bane of standardized tests... that's why I share the military recruiter freebies with my students and own kids. They're the best.