I'm the villain some are talking about. I'm a white man in his early 40s, heterosexual, and I go to church most Sundays. Hell, I'm even from a small town in Kansas and I'm angry (because of this damned election). You might see where this is going. Those are words and labels, but here are some details:

My mother's family goes back... way back. Not Native peoples back, but back like Mayflower back. Like my great-grand-something fell off the Mayflower. He was an indentured servant to one of the families on the boat. I heard this called a "debt bondage" on NPR the other day, and most indentured servants never survived the repayment of their debt. It was slavery with a sunset, and even forced slaves were "indentured" at first. (I feel another post coming, one about the history of race in America and the current state of affairs in this country citing nefarious laws around the time of Bacon's Rebellion, but that's for another day.)

So yeah, I'm the villain. The devil. Fear me. The white, hetero, Christian guy who you may assume would vote for "he-who-must-not-be-named" but shares a first name with a certain cartoon duck. Maybe that's why certain people put "the" in front of it. The Donald is not as easily confused with Donald Duck.

You see where these words could take us, right?

You see where any of these easy stereotypes take us, right?

Words have power, and the words we're choosing at this point in history worry me.

Please understand I'm a lover of words and my First Amendment rights. Years ago, in college, I had this great Rock the Vote T-shirt which proclaimed "Censorship is Un-American." You might remember the one: 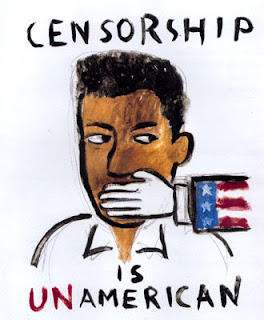 Yeah, well, I've not said a word about this God-forsaken election cycle because I've been cautioned. I'm a public servant, see, and shouldn't go too political. That's the professional thing to do. It's also the Un-American thing to do.

We know all about Un-American things, right? Like threatening to jail one's political opponents. That's just not something we do. Like turning our back on our values and convictions because we've been made to fear. "I know what he says about (and maybe does to) women, but I'm afraid." This fear raises its head in polls all the time. It wears the mask of security and protecting our borders. It hides the shameful villainy of misogyny and bigotry.

I'm done. I don't like living in fear and I certainly don't like what fear has done to this country. I also feel like it's pretty damn Un-American to equate our country with a post-apocalyptic hell for political gain. The rhetoric of this election has taken us to the linguistic breach. The words our political parties have chosen--and no one is completely innocent here--have seeped into our collective dialogue. Our words become our thoughts and shape our reality. Reality has become a little bleak.

When our words are reduced to hate and fear, we all lose. I am no demon. I am a human, just a human. I go to church--a pretty liberal, open and affirming UCC church in a college town--almost every week because I need to be part of something bigger than me. I care about my wife and my kids and their gay uncles. I can't change my whiteness, my maleness, or my hetero-ness, but I can chose the words I use and which words I choose to follow. I would never vote for anyone who makes me feel fear because fear is the real enemy.

I worry for this country. I worry for my children and my grandchildren, but I will not prostrate myself to fear. My great-grand-something served his years of indentured servitude nearly four hundred years ago, and we are--all of us--still crawling toward freedom.
Posted by Aaron Polson at 6:00 AM