“Why Write a Series? Don’t You Have Enough on Your Plate?" 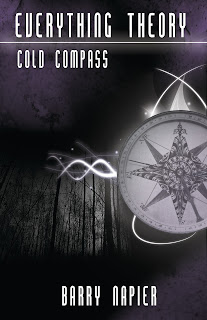 I asked myself this question roughly one hundred times as I was about halfway through the first draft of Everything Theory: Cold Compass.  Honestly, the first answer that came to mind was the fact that I simply wanted to put myself into an overly ambitious project and see it through.  The second (and honestly most important) answer was this: because the characters of the story were demanding it.

At first, I had never intended Everything Theory to become a series.  It was going to be a nice little one-off story with the potential for other books that tied into the same universe with the same characters. I certainly had no intentions of the books taking up about 90% of my writing time.  But as I made my way through the first book of the series, Cold Compass, I realized that these characters—primarily Gabe, the central character—had a lot more going on than could be covered in one book.

I assumed I could probably get three books out of Gabe, his back story, his father’s sordid history, and the shadow organization that connects it all: CSAR.  I made a few plot maps and was ready to tackle a trilogy.  Then I ended up introducing the villain of Cold Compass, a mysterious figure named Garrison Sleet.  And as I delved more into who/what he might be, it started to appear as if a trilogy might not cover the entire story, either.

So as it stands, I have a 5-book series on my hands.  It is all mapped out and fits rather well (although it appears that Book 4 might be pretty lengthy).  Book 1 has been released, and Book 2 is a few editing sessions away from being wrapped up.  I am currently taking a slight break from the Everything Theory books to give myself a break (or maybe it’s the characters that needed a break) from the twists, turns, and conspiracies.

So…why write a series?  Because sometimes the writer is just the conduit; it’s the characters within the story that are really producing the words.

To learn more about Barry, his Everything Theory books and other works, visit him at his online home: www.barrynapierwriting.wordpress.com.
Posted by Aaron Polson at 6:15 AM

Haha best answer ever: because I don't get a choice. I love it. (And it's true.)

Five book series. Bloody awesome. Although, I am waiting for the announcement that it will be even longer consider the fact that 'Book 4 might be pretty lengthy' ;)

Yep. I like the idea of an interrelated series of novellas. Writing one of those right now! ;)