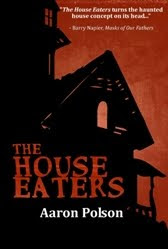 (for chapter one, check here)


I slowed a bit, not so sure if I wanted the wax relic to notice me. Something wasn’t right. His hair was weird, wispy and thin like stretched bits of cotton, and he hunched over, sort of like his spine was cracked in two and he learned to walk without it.

Maybe the House seeped into my brain a little too much. Maybe I was already missing my friends. The Hollow was cell phone black hole for sure; I lost service as soon as Dad steered around the final curve in our approach to town. The clouds didn’t help—not the best omen on moving day, especially in the usually dry midsummer heat.

“Nick,” Mom said, smiling her best, though exhausted. “This is Mr. Sanderson, one of our new neighbors.”

The relic poked his hand at me, and I mean relic. I thought at first he lost his hand in the war, whatever war he was young enough to fight. Then I noticed fingers unfold from the splotchy thing he offered me. When I touched it, though, my heart eased into a cruising speed. Not the clammy paw I expected.

“Hello, Nicholas. I’m Jeb Sanderson. I had a son like you, once.” His voice eked out, small and quiet. I almost had to ask him to repeat himself. Then his grip tightened on my hand, and he leaned closer, looking me over with his eyes, two wet marbles with too much white. He smelled a little like black licorice. “Welcome to the Hollow… or Evergreen Estates, as it stands now.”

Jeb Sanderson was the first person to call the place “the Hollow,” and, for me at least, the name stuck. He looked hollow, especially his eyes—like something was missing.

“Jeb was telling us a bit about the new development,” Mom said. “Says one other couple has moved in.”

“Great.” I slowly retrieved my hand from Sanderson’s grip. “I’m going to head in, see about sorting my clothes or something.”

“Nice to meet you, Nicholas.”

I nodded quickly, trying to smile at least a little, then brushed past Mom on the way inside. Sanderson watched me the whole time, burning me with those wet marble eyes.

My sister, Tabby—although she insisted on being called Tabitha as soon as she turned thirteen—was in her room going obsessive-compulsive on her closet. She pushed her face into the hallway as I walked by.

“Did you see the old guy?” She smashed her eyebrows down with disgust. Tabby and I could be twins, except for the gender difference and three years separation and all. Sure, she was a little on the short side, and I topped out just over six feet, but we both had naturally curly hair—dark brown—and pale blue eyes set in slender faces. Naturally curly hair was “darling” on a girl but a major pain for me, thus I kept mine cropped low. Our bodies were thin, like Dad’s. Thin and pale with too many freckles to count. Needless to say, Tabby and I spent our lives as one of two colors: Elmer’s glue or Elmo. Mom wasn’t a slouch, either—we inherited her baby blues. She was just shorter, stockier, and more athletic than the lot of us. She used to work as a corporate fitness trainer before the big heave-ho.

Of course, Mom and Tabby had these lips, too. On any other girl, I’d think Angelina Jolie. On my family members, I tried to envision Mick Jagger.

Tabby wrinkled her nose. “He creeped me out.”

I smiled. “I told him you’d like to water his houseplants.”

“Not funny, Nick.” She glared at me. Despite the freckles and pasty skin, Tabby could glare just like Mom. “He really gave me the creeps. I got this vibe, like I could tell he wasn’t telling the truth just by looking at him. A feeling I have, I guess.”

“You don’t have to be a jerk all the time.” She slammed the door and cranked her boy-band tunes.

Once in my room, I shut my own door. After the car ride and everything, I had enough of the family. Even so, I felt kind of lonely. Tabby and I were never close, not really anyway. But she was the only person I would know in school, and that had to count for something.

Flopping onto the bed, I stared at the ceiling, trying to imagine ways in which I could survive the year. Some clouds sailed across the sky, and my room filled with morphing shadows. I wasn’t used to the house, of course, but I didn’t expect so much midday darkness.

In fact, everything about the place felt wrong—the House, my mood, and, of course, the freak-show neighbor, Jeb Sanderson. My brain kept replaying the image of the old guy and his talon-like hands. “I had a son like you, once.” The blank look in his eyes sort of echoed the empty windows in the House.

The House Eaters is available for Kindle, Nook, and at Smashwords for 99cents, or in paperback for $6.99.

Have a great Sunday.