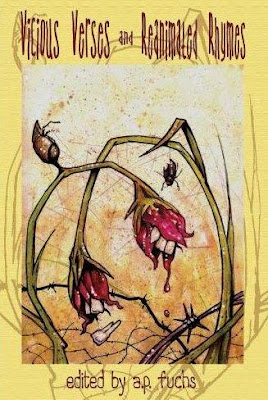 Why the poetry edition? Well, Vicious Verses and Reanimated Rhymes: Zany Zombie Poetry for the Undead Head edited by A.P. Fuchs has just been released by Coscom Entertainment, and yes, I wrote a little ode to the undead for the collection. Buy a copy and read "Former Vocations" along with other fine examples of Z-poetry.

As far as Loathsome goes...well, I had big plans. I was going to beat 40K this week. I came close, teetering just on the full side of 38K. Not bad considering Owen's injury and birthday party. We won't mention school again.

Crap. I just did.

My goal is to top the 40K mark, then spend some less intensive time adding some bits in the first half. With the start of, um, you-know-what, I plan on taking writing a little slower for the next few weeks. The rest of the book is outlined, but I'm going to wait until things settle to finish. If the 1st draft is done by the end of September, I'll be very happy. In the meantime, I might write a few short stories that have been tugging at my shirttails.

“I’m sick of your badgering…you’re a low-life, a gun-for-hire…no different than—”
Olson never finished his statement because Silas brought a clenched fist in contact with his chin. Olson staggered backwards, his glasses sitting cockeyed on his nose. His arms flailed behind him, but he caught his balance before falling. Meanwhile, Silas bent his knees and brought his fists in front of his face, assuming a boxer’s stance.

Jim thumped me on the shoulder. “You gonna stop this?”

I shook my head. John’s eyes burned the back of my neck. I heard the bunk creak as Jim scooted away.

Olson dabbed his mouth with the back of his left hand, catching a bit of blood on his upper lip. “You’ve lost your mind…I’m not f-fighting you.”

Silas came at him again, swinging a left hook into the smaller man’s chest. Olson doubled over with an audible “oof”. Silas spat on the dirt floor.

“Gonna let me embarrass you like this, ya pansy?”

Well. Not much poetic about that scene.

That antho sounds like fun. good luck with sc- I can't bring myself to say it either.

From poetry to fistfights. You're a man of many talents. :)

I love the cover of the poetry book-- it looks fascinating! Congratulations on the release, and your ode to the undead.

Mmm fight scene! I tend to think that every book needs one, at least. Well done on that-- it's a different kind of tension than the previous scenes showed us, so it has the piling on effect AND a change-up effect. Nice!

Good luck with sch--. And writing. The snippet is great.

Jamie - I think the cover art hit the right note.

K.C. - I know a few places that poetry will get you into a fistfight.

Katey - Yeah, this Silas guy has been pushing Olson's buttons, basically trying to toughen him up for the main event (versus the bad guys) later.

Good progress. I ordered my copy from Amazon UK... Zombie poetry for the win.

Hey good update. We both must've missed each other's names on the table of contents, I didn't realize we were both in there.

I liked the doubling over with the audible "oof". Very Adam West-ish.

I'm so picking up that book. Did you hear about the recent sale of an illustrated zombie haiku book that has chupacabras in it?

Why didn't I think of that? WHY?

Cool, have added it to my list of books to buy.