My oldest son competed in his first middle school track meet last night. When I was in high school, we called various members of the team hogs, dogs, and frogs--throwers, runners, and jumpers. Owen decided to try a little bit of everything: shot put, long jump, and the 200 meter dash. So I guess he was a hog-dog-frog... the image is a little terrifying.

This happened during the 200: 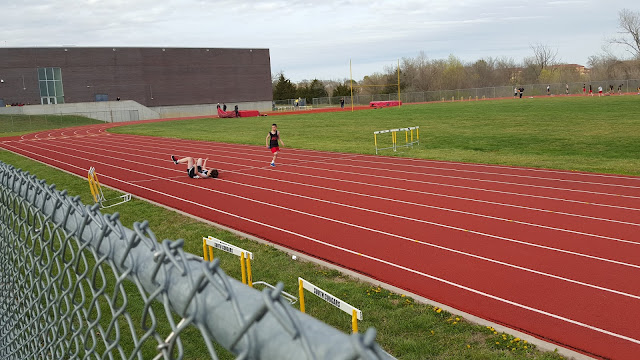 Yes, that's my son on the ground. He's fast on the soccer field, but a straight sprint might not be his thing. After the race, he was worried I'd be upset because he didn't perform well. Think about it for a minute, especially those of you who are parents. Would you be upset?

My answer--which came in the form of a question as my answers often do**: What did you do after you fell?

Owen: I finished the race.

That's all that mattered to me. I felt for him. Going down hard in front of a stand full of parents and your peers is tough, especially in 7th grade. Maybe I broke some parenting rule when I shared this photo, but no, I don't think so. I'm much prouder of a boy who crashes hard and still finishes than one who wins all the time. No one--anywhere/anyone--wins all the time.

Life is more about what you do when the bad shit happens.


*I really, really despise the word "get," but here it feels somehow appropriate. Forgive my lazy verb choice.

**I wonder if it's difficult to have me as a father?
Posted by Aaron Polson at 10:42 AM

I have a slight case of PTSD from being forced to run a 400 in 8th grade because there was an open slot and a point available. Nothing more soul-crushing than starting in front in the outside lane feeling like you might actually be able to do this thing and having the other two runners blow by you while you wheeze your way to the finish line.

Give me a kid who can handle falling with grace any day. Cheers to Owen!