Black Ribbons: "The Rats in the Walls" by H.P. Lovecraft

Black Ribbon: (noun) an award for stories which inspire me and make me say "Damn, I wish I had written that."

H.P. Lovecraft is better known for Cthulhu and cosmic horror, but my favorite tale of his "The Rat in the Walls". Yes, it begins with his trademark penchant for just a little too much exposition, but I think it works here. The ending--despite being told in the 1st person--chilled me the first time I read it. I literally shuddered and then lost myself in awe of an author being able to conjure that chill with words.

On 16 July 1923, I moved into Exham Priory after the last workman had finished his labours. The restoration had been a stupendous task, for little had remained of the deserted pile but a shell-like ruin; yet because it had been the seat of my ancestors, I let no expense deter me. The place had not been inhabited since the reign of James the First, when a tragedy of intensely hideous, though largely unexplained, nature had struck down the master, five of his children, and several servants; and driven forth under a cloud of suspicion and terror the third son, my lineal progenitor and the only survivor of the abhorred line...

"The Rats in the Walls" is readily available to read online and a free audio version can be found at Voices in the Dark.

"The Rats in the Walls" by H.P. Lovecraft text at DagonBytes (online reading)

"The Rats in the Walls" by H.P. Lovecraft PDF

There are more Black Ribbons to come. What do I need to read next? 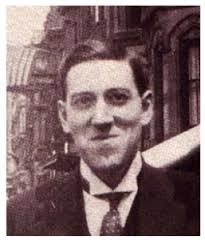 What? H.P. Lovecraft could almost smile?
Posted by Aaron Polson at 1:31 PM

Email ThisBlogThis!Share to TwitterShare to FacebookShare to Pinterest
Labels: Black Ribbons, H.P. Lovecraft, the rats in the walls, thoughts on writing