Last June, Owen had a chance to sign up for Premier soccer (sort of the top-shelf league in Kaw Valley Soccer). Coach leaned pretty heavily and Owen wanted it. Aimee and I discussed... We talked about our as-yet unborn child, the strain on the family's budget (Premier is fairly costly) and time (most games are in Overland Park--45 minutes away by car).

We decided--as a unit--to wait. Too much travel, too much stress on the family with a baby due. Owen was disappointed. Aimee and I felt like we made the right decision. Parenting is hard sometimes. Damn hard.

Tomorrow, Kaw Valley is hosting Premier tryouts. Owen isn't attending--his decision. He wants to play club at least one more year. I told him it was his choice. I'm proud of him, regardless of what he chooses and how he plays. He's a great kid. So is Max... and Elliot. (Elliot's only six-months old and just popped his first tooth--how can he not be "great"?)

But damn, it's hard doing this alone.

I need my partner. 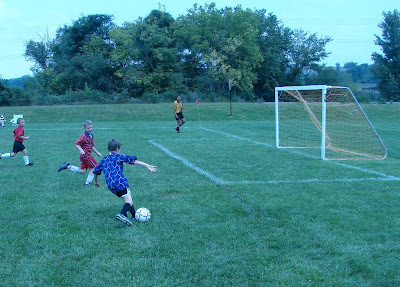 (a vintage shot of Owen taking a shot... back when he used to play forward in recreation league)
Posted by Aaron Polson at 9:57 PM

Way to go Elliot on your first tooth! He will be chewing on Legos in no time, watch out Owen and Max! You do have some pretty awesome boys, and no I don't think I'm partial!

I had an "I miss Ziggs" moment today, too. I was trying to remember someone from MU, and I realized that there are so many college memories I won't be able to recall/relive without her. Our experiences were so intertwined back then. We wore each other's clothes, shared scoop on our latest crushes, cruised the bars and hit the dance clubs together. She knew my other friends, and I knew hers. I miss my Z and I wish you didn't have to miss yours.

Aaron, those decisions are difficult to make with or without your partner and it's nice when our children make them for us. I'm not sure how old Owen is but sometimes our children know much more than we think they do. Our children are so resilient that's it's amazing. Congrats on getting through Elliot's first tooth. It's difficult being a single parent I know from first hand experience, I was one far too long before I met my husband. Life sometimes throughs us a curve ball way before we're ready, but how we handle it is what makes the difference for our children. Aaron I wish you the best in everything you do. You're a great father and yes you will get through this and you will learn from it all. But what you take from it today maybe totally different than what you take from it tomorrow.
Take care,
Sherrie Wright

Oh the joys of the soccer pitch. Don't miss those days at all!!!!

Sometimes I put blogging on hold when I'm writing a lot. I had no idea, until today, that this happened to your family. I've spent the last hour reading over your earlier posts.

You are in my thoughts.

I always felt alone, my while life. There were always people around, and somebody to play with. But I just didn't want to be around them. I was extremely shy, I never talked to strangers, and it took all my mother had to get me to make friends. that's another thing, my parents treated me different. They gave me more than my other siblings, and told me they loved me all the time. At first I thought its because I'm the youngest, then, later on, I thought it was because I was their miracle baby. My mom wasn't supposed to be able to have more kids. And now I know the truth. My brothers wife recently had triplets, two of which were still born. It really hit my mom hard, and she released the truth. I was a twin, and my twin died shortly after being born. My whole life there was a piece missing, and I never even got to know about it. Cherish the memories you have of Amiee, cuz those memories are better than nothing at all. But my life wasn't all bad, I love my parents more than anything, and I wouldn't change the way they loved me. Give your boys twice the love, especially Elijah, because he will never get to know what he missed.