Aimee and I enjoyed hiking--especially in National Parks. Our National Park map still hangs in our basement, framed and laminated with colorful push pins for each member of the family. The pins indicate where we've been.

In 2000, Aimee and I took a trek to Yellowstone National Park, otherwise known as "Disneyland of National Parks," meaning it's rather crowded and overflowing with RVs. Yes, we drove to Yellowstone in my tiny Honda Civic (and that, my friends, was quite a road trip). We brought most of our food in a big cooler. We camped for a week and found plenty of less-traveled paths (with the help of a few nice park rangers).

Aimee had a nose for water. She climbed onto countless rocks in the middle of mountain streams while I stood on the shore, exhorting her to be safe. Here she is in a common moment of contemplation. In the scrapbook, I wrote a simple note on a Post-it: the road less-traveled. 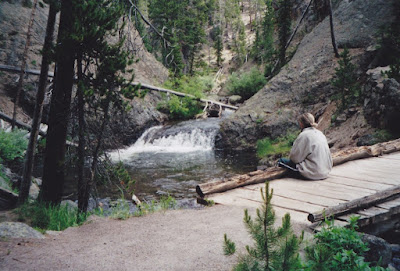 And that was Aimee's life as I knew her. She never took the easy path--helping start a grant-funded mental health program for kids in local schools, coaching high school sports (and later her sons in soccer and basketball), spending a week each summer at Anytown (a diversity/leadership camp for teens). She even listened to all of my crazy dreams and laughed when she found scraps of paper scribbled with story ideas.

I like this picture more than any other from Yellowstone. I like to imagine what she was thinking, or maybe that she wasn't thinking at all--just letting the water pass beneath her. It's a peaceful thought.
Posted by Aaron Polson at 10:54 AM

I definitely need to go back.

Absolutely breath-taking! I love this picture...thanks for sharing!

I'm glad you have such a wealth of wonderful memories to draw from.

Love the picture, very Aimee. About the bits of scrap paper she found, the funniest one had to be when she found the crumbled paper under her pillow as she woke up in the morning and thought it was a love note and opened it to find it had some gruesome details for one of your horror stories. She thought it was so funny when she was retelling me the story and events and added, "that's what happens when your married to a horror writer". I love that story, I love that memory.