The Travelling Theatrical Tour: On Dreaming the Impossible 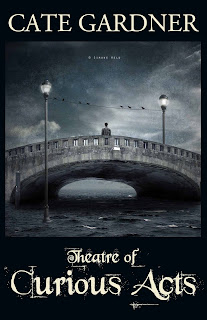 
Thank you to Aaron for allowing me to invade his blog so that I can celebrate the release of my book, Theatre of Curious Acts. Aaron is one of my favourite online folk and I thought an apt subject for his blog would be 'On Dreaming the Seemingly Impossible' for as Aaron's recent publication in Shimmer proves, perseverance pays off…

Clarkesworld (insert magazine of your choice here) will never accept one of my stories. I fully expect they won't - most of the time. This isn't a case of doubting whether my stories are good enough, it's about a market that thousands of writers target and, which only accepts twelve a year from the slush pile.

Despite this fact, every time I send them a story I think 'this is the one'.

It never is, of course.

Does receiving a rejection from Clarkesworld bother me? Heck no, I just sent a story to one of the top magazines in the speculative fiction business. I dared to dream.

If rejections get you down, and hey we all have our moments, try to remember that every other writer out there, that one you just twittered, that other who just wrote a Facebook update that left you gasping with envy, they got a rejection yesterday or they'll get one tomorrow. You're not alone. Rejections are part of the business, but their partner is a wonderful thing called hope. What was just rejected goes out into the world with fresh hope.

And you know some of those writers who've had stories accepted by or already published by Clarkesworld, well they didn't think they'd make it in either. Now I need to go check if seven days have passed since I last subbed to Clarkesworld.

Theatre of Curious Acts is available at all good online bookstores.

Returned home from the Great War, his parents and brother in their graves, Daniel walks a ghost world. When players in a theatre show lure Daniel and his friends, fellow soldiers, into a surreal otherworld they find themselves trapped on an apocalyptic path. A pirate ship waits to ferry some of them to the end of the world.

Already broken by war, these men are now the world's only hope in the greatest battle of all.

More information is available at www.categardner.net

That's a great looking cover, and I look forward to reading the book, Cate!

I think every writer has a white whale (though Clarkesworld is a particularly tough mammal to track, to be sure!).

I know that I keep sending work to a particular magazine, and they keep responding with exceedingly polite (but personal) rejections to keep trying.

So I do...good luck with the tour!

I liked it when Mamatas used to personally respond to every submission. It made me feel I had a chance.

I didn't start subbing to Clarkesworld until after the Mamatas years, Alan. I believe he was wonderfully ferocious.

Denial is the key to dealing with rejections, I think. Suppress and suppress again. Works for me.