What The Abominable Dr. Phibes Taught Me about Storytelling

I simply adore 1971's The Abominable Dr. Phibes. Vincent Price is at his grandiose and macabre best playing the titular character. A major spoiler warning to those who have not seen this vintage gem: this post is about endings--the vengeful doctor's in particular. 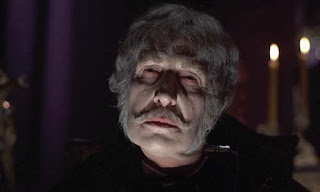 And in true Weird Tales style, Phibes accomplishes his murders with style (if not reality).  Phibes has a flair for the  post-steampunk with his hail-making machine wired to a car's battery (the film is set in the mid 1920s). But this post is about endings...

And the end to the movie is inevitable: Dr. Phibes chases revenge as Scotland Yard closes in on him. In the final sequences, as he forces Dr. Vesalius (Joseph Cotten) to perform surgery on Vesalius's son (to retrieve a key implanted near the boy's heart--um, did Saw really allude to Phibes? Hell yeah.), you get a sense it was all inevitable.

Phibes, through an ingenious neck transmitter to gramophone device, claims nine will die. Barks as much in Vesalius's face during surgery, in fact.

And nine do die.  But here's the storytelling magic: the ninth isn't Dr. Vesalius's son--it's Phibes himself. As the police break into the house, Vesalius rescues his boy, and Phibes's assistant Vulnavia dies under an acid bath (but she was a clockwork, I think), Phibes attaches himself to a pump in his underground vault, lies down next to his wife's corpse, and fades away as the pump removes his blood and replaces it with formaldehyde.

What can a storyteller learn? The ending, even when it seems inevitable, can still surprise an audience and be right. Even though Phibes is a heartless killer throughout the film, he does it with a style and charisma which leaves the viewer (at least this viewer) cheering in the end.  Phibes seals his tomb as he dies, leaving the police wondering how he escaped and the audience in on his little secret. He never planned on escape.

It's perfect. The writers didn't choose the easy ending: revenge on Dr. Vesalius (he did save his son) and no one expected Phibes to be the ninth to die. When is the last time the police never caught the baddie? Beautiful.

So writers, ask yourself at the end: choice A or B? And then choose C. 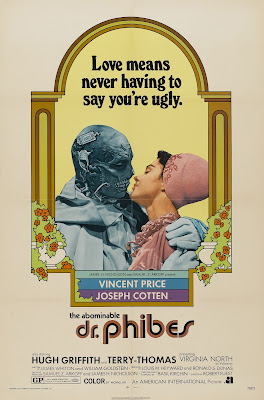 (Need I mention Phibes plays a bad-ass pipe organ?)
Posted by Aaron Polson at 8:41 AM

Love this discussion! This is just a great little atmospheric creeper, and I grow to appreciate Vincent Price more and more with every passing year!

Hi, Daniel. Price seemed to relish every moment on camera. He loved his characters and the campy movies in which they starred--and it shows.

Oh, how I love Vincent Price.

God, I can't believe I've never seen that -- sounds brilliant! See, this is why I get so annoyed when people write off old movies like this. Yeah, there's some cheese, but it's unrepentant and lovely.

I will now go and find this. Yes.

Dr Phibes is one of my childhood icons.... I had a color 8x10 picture from a book that has hung in my room for well over 30 years ....My favorite Vincent Price performance of all time... I even enjoyed the second movie ...It had some pretty cool deaths
Dr. Theda