What Kolchak The Night Stalker Taught Me About Story Telling 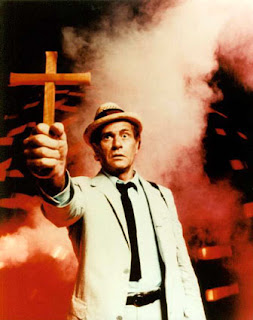 I had the opportunity to dust off my Kolchak: The Night Stalker DVDs this weekend. What a marvelous bit of macabre TV history.

A storyteller (e.g., writer) can learn much from Kolchak. For example:

What have you learned about storytelling (or writing) from your favorite television programs?
Posted by Aaron Polson at 8:34 AM

Kolchak! Love that show. I'm actually fairly new to it, having discovered it a couple Halloweens ago when they had a marathon. But yeah, one trick pony for sure.

My favorite is the huge camera hanging around his neck 80% of the time.

Wait a minute -- wasn't he the dad in A Christmas Story?

Tony - Not to mention the dude owns one suit (and it doesn't fit).

Milo - Why yes, yes he was. Now you know why he was so nervous... Monsters were out to get him.

Great show! Had no idea it was on DVD.

As you may or may not know, Chris Carter used Kolchak as inspiration and a basic building block for The X-Files. Realizing the very formulaic nature of the episodes caused Carter to throw the now-famous X-Files mythology into the mix.

This is a great list. Never watched the show, though.

The Wire--Every single character not only has a motivation, not only has something to say, but can be used to enhance your story.

Life on Mars (UK)--You don't have to drag the climax out indefinitely. Build to it. Use it. Move on.

The Shield--Keeping in mind LoM's lesson? You can build to a fantastic climax while still keeping a quick pace. By the end of its run ONE episode would have more happen in it than three or four episodes of some network shows.

Rome--Good characters can keep the audience interested even if the setting is completely different from what they normally relate to.

Buffy--Don't be afraid to include elements from other genres in a story that may seem very grounded in one specific genre.

Barry - I knew X-Files owed a bit of its life to Kolchak, but I didn't know how closely.

E. - It's good for a spooky thrill (and the camp factor).

Chris - All great lessons. I need to track down Deadwood (and it sounds like a lesson I learned from The Things They Carried).

As a monster-obsessed kid, watching Kolchak was the best! I haven't revisited it on DVD but I clearly remember being scared shitless when Kolchak was stitching salt into the lips of the zombie. Where the hell did that zombie cure come from?

What I learned from that show was the importance of set-up. Kolchak was a writer for a tabloid like the Weekly World News that ran cover stories about Bigfoot and UFO's. That set-up solved two problems at once: it explained his investigation of the occult and also gave the reason why his expose of the supernatural was never taken seriously by the outside world. It's outrageous tabloid schlock.

One other aspect of the set-up was that the hero was the character least prepared to take on the challenge of the premise. Kolchak wasn't a cop or a PI. He didn't even carry a gun. He was a nebbish reporter in a straw boater armed with a tape recorder. Yet, he was the lone guy forced to confront the monsters. The weaker or more unprepared your hero is to take on the plot, the greater the dramatic arc you get watching the hero rise to the challenge.

Tim - Voodoo zombies are the best--that scene in the junkyard is one of my favorite in all of Kolchak.

That's it. I HAVE to go find the DVD set and watch it. Thanks for bringing back the Kolchak, Aaron!

I finally saw Kolchak for the first time about a year ago, maybe a little more, with the vampire movie. It was brilliant! (And yeah, weird that he's the Christmas Story dad.) Great list of points :D

Also, the tabloid thing just made me think of Peter Parker. But then, what doesn't?

Lately, I am learning from Boardwalk Empire. Learning how to make the horrible, horrible things characters do completely believable. You know. Like in real life.

I'm awful, I'd never even heard of Kolchak. It sounds like a fun show to watch around Halloween, though! I'll see if I can find it.

Have you seen Writer Beware's update about that horror plagiarist from last year? http://accrispin.blogspot.com/2011/10/writers-against-plagiarism-call-to.html Looks like he's still at it. I thought you might be interested, since you were one of his victims, weren't you? (And I'm sorry this comment sounds exactly like spam and I hope your filter doesn't zap it!)

Katey - People do some horrible things... Yikes. You should really check out The Night Strangler if you liked the first Kolchak movie. I've been viewing it in segments on YouTube. (the DVD is OOP and goes for a mint)

KC - The HWA has a bounty out for this same plagiarist. Thanks for the head's up--not spammy at all. I think you'll love Kolchak. ;)

Never heard of the fellow, but as I'm a Brit that's hardly surprising. TV can be masterful at times and I've spent a fair bit of time studying Buffy - now that's storytelling.