Some stories have a clear protagonist--others operate with an ensemble cast.

I'm reading Hell House by Richard Matheson for a third time.* Matheson skillfully weaves four characters into his narrative, switching scenes when hopping heads, and it never feels wrong. He's consistent within a scene, but the reader has four protagonists to follow. I like it. 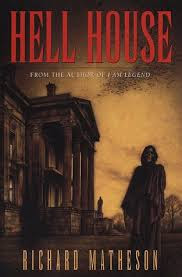 I'm not playing the same kind of game with In the Memory House, but some of the minor characters have scenes of their own. Like Johnny, a twenty-something veteran of the Iraq war:

Funny—he hadn’t thought of the cabin in years. How old had he been—seventeen, eighteen—the last time Uncle Mel had them to the cabin? That was all before Mel’s prostrate cancer, the chemo, and the funeral. Years ago. Before college, the house, and Baghdad.

Johnny rolled over, closing his eyes. He didn’t need his eyes to see the thick layer of shit-yellow dust on clothing and skin and buildings and his Humvee. Dust covered everything. He didn’t need his eyes to remember the way Ty Miller’s face looked seconds before the rigged howitzer shell ripped open the side of their Humvee and a hunk of shrapnel tore a gash in Miller’s throat. The blood came to Johnny in his sleep. He saw it pour from the tap. He even pissed blood.

He's not the "it" character through the whole book, but everyone in the cast has a moment on stage.

I'm attempting this in my second novel, though I may have gone a little overboard with at least 6 "main characters" and mini-scenes with minor characters in classic King style. :-p

I've never read any Matheson which is just wrong. Although he has a story in the Best New Horror 3 which I'm currently reading.

Oh, and I love stories that have multiple characters.

Cate - I didn't know Matheson was still producing material. If you've seen many episodes of The Twilight Zone, you're familiar with his work. ("Nightmare at 20,000 feet")

True (re Twilight Zone) - now I don't feel so bad. Just checked - it might not be 'the' Richard Matheson but his son. Man, I'm crap.

Cate - Quite possible. I know Matheson's son dabbles in the genre.

I'm 94% through King's Under the Dome, and I've noticed some major in-scene head-hopping that's taken some getting used to. I think it works when it's done right, and King's able to pull it off.

I'll be honest...I had high hopes for Hell House but I put it down half way. It felt, to me, too disjointed. That said, I did think that Matheson had his shit together, but I didn't think the plot moved at an appropriate pace.

I always look at this book as one of the big-time "misses" by the horror royalty.

That said, I'll always contend the best novel King has written, to this day, is The Dead Zone. After that?

I've never understood readers who *don't* read great books a second and a third time (and a fourth and...) Especially readers who are also writers - a second reading is a great way to see how the book works, as much as such a thing is possible.

I love this book. I don't mind multiple viewpoints, as long as they're done well. I read a book a while back and each chapter was from a new character's viewpoint (28 chapters, 28 viewpoints). I never felt like it was in the story or in anyone's head. It nearly drove me batty.

It's really a bit of a headscrew to write, and that's part of what makes it doubly impressive now when I see it carried off.