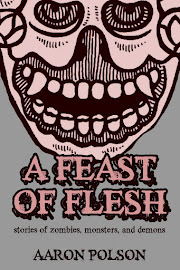 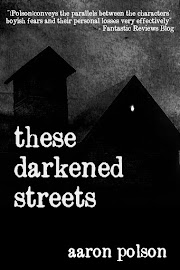 I announced a few days ago the release of two new collections.

What I didn't mention was the small experiment I'm running. See, These Darkened Streets, containing more stories and tales which haven't been reprinted as often, is priced $1.99. A Feast of Flesh is one of "those" 99 cent books.

Maybe there isn't enough difference between the prices. Maybe the "content" is so different I won't gain useful, valid data. So far, A Feast of Flesh is outstripping These Darkened Streets by a 2 to 1 margin in sales. Two books by the same author released on the same day, and the 99 cent book is selling twice as fast...

Interesting. Would like to know how you're promoting sales. Yoou've givenme an idea.

I know in situations like this, I will often buy the cheaper book first to see if I like the writing, and if I do, then go back and the get the second. I released a two book short story collection 2 weeks ago, each with 11 stories, each around 90,000 pages, each $2.99. Book one sold 5x as many as the second. So, in your case, if people wanted to sample your writings, they bought the cheaper one. In my case, they bought the one labeled "Book 1" first. I think people unfamiliar with your books only wanted to buy 1 first to try, and the cheaper book is the obvious choice. Now, if the second, more expensive book catches up you know you've hooked people. I'm real curious to see if Book 2 catches up with Book 1 in my case, but the problem is, I know I do this, sometimes I will buy something and it will sit on my eRreader for a month or two before I read it. It may take a while before the second catches up

Neat. I still have a big grudge against 99 cent books. I think it's too cheap and sets an expectation that all books should be that price. But as a reader, totally understandable why people snatch them up.

The whole price point issue is huge with self-published authors. Because, as a reader, you wonder if you are getting quality at such a price. The flip side is, though, you can spend $12 on a traditionally published eBook and get crap, too. As a reader and a writer, I look for $.99 books, but I do so with the understanding that self-pubbed authors need to price low to get interested readers to buy it. Sure, you may charge $3-5 for your book because YOU know its worth that, but few readers do if they have never read anything by you before. it's a tough catch-22. No author should have to work for a year and sell something for $.99, which they then make $.35 a copy on. Unless the book is AWFUL, the author deserves more. But in a time when there are now thousands of more books available because of ePublishing, you need to compete.

But I cheat a little... right now I am writing and selling 15-25K word novellas for $.99. That is a fair price, i think, for this length a work. And when i finally get around to writing and releasing a novel, I will sell it for $2.99. But new potential readers will still have something shorter they can buy first

Hmm, yet again I prove I'm different from 'normal' people by buying the more expensive one first...

I'd it helps, I didn't even notice the price difference, I just liked the description of one more than the other (think it said something about blending magic realism with horror). To me, the main cost of reading a book is *time* because I know I'll never read all the good books in the world (particularly with bastards like you putting out two a day!) so a price difference of a quid isn't one that would alter my purchasing behaviour. Good luck with 'em anyway....

"I know in situations like this, I will often buy the cheaper book first to see if I like the writing, and if I do, then go back and the get the second."

This makes sense to me. An interesting experiment either way.

Walt - I struggle with the promotion vs. cost/benefits. Too much time on promotion doesn't seem to generate major gains in results.

Bradley - I agree about price "fairness". Most of these collections are around 20-30K and previously published (of course it doesn't mean anyone saw the stories in their original context).

Lee - I understand the grudge. What about free? I can tell you free really moves books (about 35K copies of We are the Monsters since June), and no one gets paid when something is free.

James - I hope the books sell based on content, not price. Price is always a big factor, though.

Anthony - interesting if not scientific.

Content, I sent a link to myself after your last post to buy "A feast" Just because it was more my cup of tea. I wasn’t worried about price.