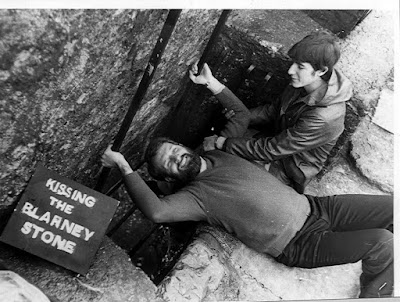 1. What do you think makes a good story?
Empathy. The sort of reader I appeal to may tell you he/she/it likes the action or the visual descriptions or the exotic locations or whatever, and it will be true. But it won't be the primary, overriding truth, which is that sophisticated readers are not satisfied by any or all of these things in the absence of identification with the characters. Characters don't need to be sickening suckups but even the worst of them must have some redeeming feature that people recognize from within themselves.
2. What is the hardest part of being a writer?

Definitely getting used to rejection. I've been a professional writer since I was thirteen, and by the standards of our profession I have been more than decently successful, and decades later I'm still not used to rejection. Advertising, where I worked for several years, is widely said to be a ratfuckery, but I found it less bruising than being a writer, perhaps because I foolishly expect people in the arts to be more sensitive.
3. What would be the ideal meal for one of your favorite characters?

That's a question framed by a non-writer. Every one of my characters is different and would therefore choose a different ideal meal. It is, all the same, a valid question to ask a writer, because of course he creates at least some of his characters as wish fulfillment. So I'll tell you one of my favorite meals, which in fact I'll cook for my wife and me tonight. It consists of a bowl of cooked, peeled, backed prawns just heated through in butter with a dose of herbes Provencale or a grind of fresh black pepper, with perhaps a few cocktail tomatoes, say one each of plum, yellow and round red, thrown in for additional color, served with either garlic bread of plain buttered seeded bread fresh from the oven at our local supermarket. I'm of the opinion that an artist who hasn't learned to cook has some way to go yet.
4. What is the last book you read?

I'm reading my way one last time through the ten books in the series RUTHLESS TO WIN by my protege Dakota Franklin, which launches later this year, after the volunteer editors (I'm always recruiting, folks, so if you think you can do the job write to me — andrejute at coolmainpress dot com) cast one last pair of eyes over the texts to see that they are spotless. Of course I knew that Dakota is talented when I started working with her a dozen years ago, or I wouldn't have wasted my time, but now I'm just stunned by the superb way these ten novels, each with a different lead character, draws the reader into a whole world she has imagined, so real that you can reach out and touch the characters because you empathize with them so readily.
5. If your books could only have single color covers, what color would it be?

Sunflower yellow. I wouldn't have survived in a profession which eats its children for so long, or be so cheerful still, if I weren't basically optimistic. Today's little challenge was to choose a question from your long list, and make up my five with the next four in line, regardless, and to say something interesting about each of them. One of the grand things about being a writer is that your judges are out there, that you don't have to face them. Conversely, one of the grand things about the internet is that it puts you in touch with your readers. I've been amazed at how profoundly a writer can affect his readers' emotions and lives.
Netsite http://coolmainpress.com/andrejute.html
Blog Kissing the Blarney http://coolmainpress.com/ajwriting/
Amazon USA http://www.amazon.com/-/e/B001K1KSHI
Amazon UK http://www.amazon.co.uk/-/e/B001K1KSHI
Smashwords http://www.smashwords.com/profile/view/AndreJute
Coolmain Press http://coolmainpress.com/home.html
Posted by Aaron Polson at 6:00 AM