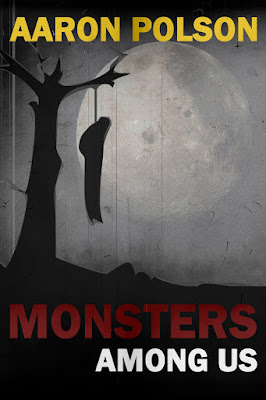 Why would I guy do a thing like that?

1. Readers can purchase the content of four books for less than they would pay individually.

Think about items 1 and 2: readers gain and I gain. Sounds good. But Aaron, you say, what about those 99 cent books? Aren't you cannibalizing their sales?

Maybe.** But I suspect bargain hunters will still pick them up. Monsters Among Us includes every story in The Bottom Feeders, Thirteen Shadows, and Violent Ends as well as "Black Medicine Thunder and the Sons of Chaos". It's all linked with a handy-dandy table of contents. It's also my first legitimate foray into the $2.99 price point. In the next 24-36 hours my second foray goes live. I'll talk about that come Monday... If you're observant, you'll find out sooner.

It's all a big experiment, after all.

* No, he didn't. But I did take the idea from him.
** Remember what I said about this being an experiment?
Posted by Aaron Polson at 10:23 AM

Email ThisBlogThis!Share to TwitterShare to FacebookShare to Pinterest
Labels: Kindle, monsters among us, The Bottom Feeders and Other Stories, thirteen shadows, violent ends

I think that's cool. Everybody wins. I have no idea how to do a table of contents (with hyperlinks?) for an eBook.

Laura - This article explains how to do it for Kindle. Smashwords has a pretty good explanation in their style guide.

Thanks for the link!

Gotta say, I love the cover.

Thanks, Robert. I've been playing with graphics way-too-much lately.

Thanks, Michael. I hope you enjoy.

Great call, Aaron. I love the cover as well, and it just makes sense to offer different sizes/options...

I think $2.99 is a fine price point. Less than half the cost of a mass-market paperback, but all of the dark narrative goodness?

That's a hell of a deal!

I think it's a great idea. This way you can put a book up for more money without readers feeling ripped off. It really is a win-win.

You are a publishing machine!

Thanks, Daniel. While Konrath didn't really "make me do it", he does have some good ideas...

Interesting experiment. Best of luck with it; I think it's a great idea.

I'll be very interested to see how this goes :).

I just came over from the Kindle Boards following your striking cover straight to your blog!

Rebecca - I plan on full disclosure. It's part of what I've been calling "The Big Experiment". Thanks for the visit.

I like this idea and plan on doing it too once my series of novellas is complete.

I don't know that I'll do all the combinations Konrath is doing, though. Seems like he is taking every possible way to package his books and doing it. I understand to a degree, but I just don't have the time and am not sure the financial benefit would be worth the time.

This kind of bundling I can get behind, though. I'll also be watching to see how it goes. Good luck.

Sorry to shout but I don't ow if you can hear the rest of us due to this cloud of dust you have left in your wake as you rocket into the successful future.

Yeah, that's a very cool idea--then the bargain hunters, as you say, might find you through one of the smaller ones, and just pick up the big one after that. Love it!