The Going Price for Lawn Service (and E-books)

Back in the summer of 1988, my brother and I started a lawn service. He'd taken care of several lawns when he was in high school in the late '70s/early '80s, and figured I needed a job. I was fresh out of seventh grade and wanted a Nintendo (original 8-bit variety).

Our base price? $5 a lawn. The going rate at the time started at $10. Of course we charged more for bigger lawns, but never more than $15. We worked together. He mowed around trees and did the trimming; I tackled the big, wide-open spaces. It was hard work. By mid July, I had my Nintendo.

Why charge less than competitors?

Volume, I guess. At the apex of our business, we managed something like 35 lawns a week.

I've just released Borrowed Saints at $2.99. It's a YA novel, right around 50,000 words, and I spent plenty of time polishing it. Sales have been weak. Very weak. Sure, I need to so some more promotion, etc. Whatever one wants to argue about value and how much a consumer should pay--I believe e-book readers have come to expect $0.99 books from Indies. I didn't start it, and I sure didn't make it happen by myself.

Let's look at the math:

The math seems to argue for the higher rate, right?

But I think something else is going on, something more important. Even if you only make four sales at $0.99 to each one at $2.99, you've quadrupled your readers (or potential fans). Yes, less money now, but more potential money in the future. Like an investment, right?

Volume can work wonders, even at very low prices.

Victorine E. Lieske has sold more than 100,000 copies of Not What She Seems at $0.99. That's a success story I'd take all the way to the bank. Granted, I don't write in the same genre and Victorine has spent a good amount of time marketing her book. But wow.

So what will I do with Borrowed Saints? What do you think I should do? 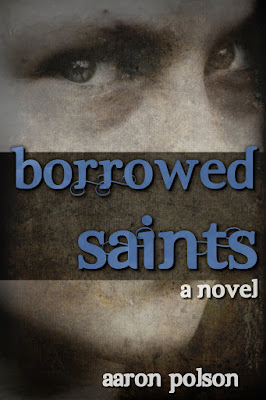 (Well, I did redo the cover. It will take a while to show on Amazon.)
Posted by Aaron Polson at 8:19 AM

While I'm not selling quite as many as you, I have noticed the huge difference in sales for The Masks of Our Fathers when I dropped the price to $0.99.

Personally, I abhor "the race to the bottom" on pricing for anything. In this case it devalues one's intellectual property and the effort one put into the resulting endeavor, in my opinion. Having said that, I can see the value of 99¢ pricing for a loss leader in a series, but right now I don't have a series out there (but will later this year).

Best of luck on sales!

Yeah, Aaron, I think you are being impatient (and this is coming from a guy who's very impatient). I mean, jeez, you only released the book last week! Give it some time. I will say, though, that a 99 cent price point will help it get spread throughout Amazon's system better. When I released The Calling last month, I did so at the introductory price of 99 cents and sold about 150 copies. Now at $2.99, I've sold maybe 40 copies, which is earning me more money. The Dishonored Dead, though, which I started at $2.99, has only sold about 20 copies so far, and it's a zombie novel for pete's sake! But at the same time, we haven't even hit the middle of the month yet, so I'm not too worried. And then, of course, a new month starts and we can do it all over again. Remember: it's a marathon, not a race.

R. Doug - I abhor it, too. But I have to be realistic about the market. I'm just not sure what reality is...

Robert - I am impatient. Thanks for settling me into reality. Marathon. Check.

I did an experiment with pricing for my blog. Unfortunately, 99 cents is not a silver bullet. While you might get more readers initially, usually the spike flattens out unless you do some serious promotion for more visibility. What will help you more is finding book bloggers to review your work. I've had great success in the wake of reviews. Good luck!

Predictably enough, I say $2,99. But I am extremely interested in "protecting the brand". You have sampler things for $.99 that people can try, and that goes without devaluing your new work and novels. You want to do a sale later and drop the price to $.99 for a month, there you go--but it's not the real price, is it?

At least, that's how I'd be thinking if it was mine. But it's not. It's yours. The choice before you is between devaluing your work in the eyes of some new customers and potentially grabbing OTHER new customers who don't care about that kind of thing. Brand Protection vs. a larger volume of sales immediately. Books don't make their money in the first month or six, not ever, but it could be more word of mouth.

There is no wrong answer, it's about what you want for your book. There's no magic formula either way, so just be true to yourself and your lovely work.

PS this quote from that article is why:

“When I saw that highly successful authors were charging $9.99 for an e-book, I thought that if I can make a profit at 99 cents, I no longer have to prove I’m as good as them,” says Mr. Locke. “Rather, they have to prove they are ten times better than me.”

But see, you are better than them.

The difference is, with the lawn work you had to do more work to get more money.

If you can make more money selling at a lower price, you should. People get too emotional about these things. Thinking about devaluing and wishing that other writers would conform to your pricing ideas is a waste of energy.

I currently only charge .99 for short works, but I got your back if .99 works best for you.

G.P. - Thanks for the advice. I think Robert nailed it: patience. I need more of it.

Katey - I'm trying (to be true). I've been distracted by too many shiny things of late.

Alan - I don't have that much energy to waste. Good point.

I'm not sure what to think about ebook pricing. It's just all over the place and everyone has valid reasons for the prices they list. In a few years I suspect we'll all look back in disbelief at this time and wonder why things were so unsettled with ebooks. The important thing is that you're selling copies, though. :)

I'd been planning to start my fantasy novel out at an "introductory rate" of 99 cents when it launches, then after a month or so raise it to $2.99.

The idea is I'd like to build word of mouth at the cheaper price, then adjust the pricing as needed after that.

Totally just a theory, so we'll see how it works!

I released 'Not Before Bed' for free on Smashwords and in a month I've had 300 downloads. And I dont even know if that figure is 'good' or not. Basically, I tell myself that the point of the ebook is to get exposure. It's a way for my short stories to do a little work for me and just get people reading my stuff. Then, hopefully, when I release a proper novel later this year (the Universe permtting), there might be a meagre interest waiting for me already.

But that's the stage I'm stuck on. When I've got a fistful of books out like you, I'll have the same dilemma, no doubt.
The only thing I'll say, is dont sell yourself short. You have a fan base, so use it.

Rebecca - Good luck. That's why I'm calling this an "experiment".

Craig - I think it's a great idea for building an audience. I hope it continues to go well for you and the universe plays along.

I don't know anything about selling Ebook, or anything else come to that.
But I would like to think you have a following already on here and if you are willing to market your work you should be able to get a good return on the real value of all your hard work writing your book.
I don't think you should undervalue your work to bring in readers. No other writer, famous or otherwise sold their books cheaply to bring in readers.
So I would put a middle range price on your work.

Just my views. Good luck and I follow your writing career with interest.

Love the new cover. Reminds me a little of 'The Passage' (got to be a good thing).

So many wise things have already said about patience and the price of books so I won't add further. Plus, I haven't got a clue ;)

It seems to be such a crapshoot. I've finally decided to have a new release at 2.99 and older ones at .99, but I don't know what the magic formula is.