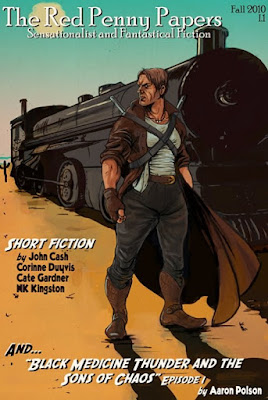 The first edition of The Red Penny Papers is hot from the "virtual press" and you can read:

“The John” by Corinne Duyvis
“Pluvial” by NK Kingston
“Shaper of Dreams” by John Cash
“Postcard Wings above Blackpool Sands” by Cate Gardner
and...
“Black Medicine Thunder and the Sons of Chaos” Episode 1 by Aaron Polson

I'm a little (a wee bit) excited to see Abraham Reaver (the rather gruff looking gent on the cover) released to the wilds of the interwebTM.

Thanks to editor extraordinaire KV Taylor for the opportunity to write something fun.

I'd like to do an editing pass on Borrowed Saints. It has languished on my hard drive since last May. So sad. I have a few ideas for a rework of the ending, so yeah, maybe I can do that, too. I've finished another story for We're All Liars Here. I'd like to squeeze out another 10K or so on that project by the end of September. No promises, though.

Steady as she goes.
Posted by Aaron Polson at 7:43 AM

I need to do some hard edits myself, man--plus a couple thousand words on sundry projects. We can do this. Yeah. Of course!

Damn. Now I must decided...reading this or writing during lunch.

Looking forward to it. The cover is mucho awesome.

Neat. I'll be sure to check these stories out this week. And best of luck with the reworks.

Katey - Of course we can.

Barry - Write. The Papers will always be there (well, digitally, that is).

Lovin' that cover too.

Yeah, I've been looking out for your story in Red Penny Papers. I've dived into it a little this morning. Did not dissapoint and was well worth the wait. Can't wait to finish it.

Loving that cover so much. Can't wait for part two.

Hearing a lot of good things about this magazine. Must find time to read it.

Congrats on the publication! You rock. And good luck with your September goals.

I love love love that cover! And the TOC looks pretty darn cool too. Congrats!