WIP Wednesday: Blood from a Stone

The boys and I paid visit to Grandma this week, allowing me another opportunity to mine my poor ol' hometown for story ideas. How many times can I squeeze words (blood) out of these stones? 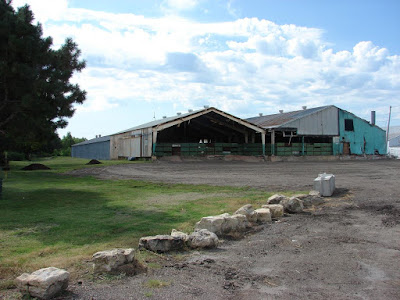 The factory building which inspired "Spider and I" is gone. Gone-gone. It used to be in front of the ugly sheds in the picture above. 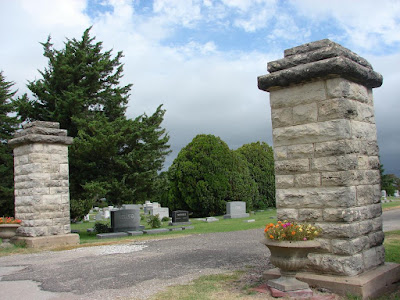 These limestone gates still guard Greenwood Cemetery. I've called it by various names in the past, but the cemetery, and the creepy pond behind it, inspired various tales, including "The Bottom Feeders" and the as-yet unpublished "Wanting It". I learned to drive on the gravel roads in Greenwood. I guess Mom thought I couldn't do much damage to the residents. 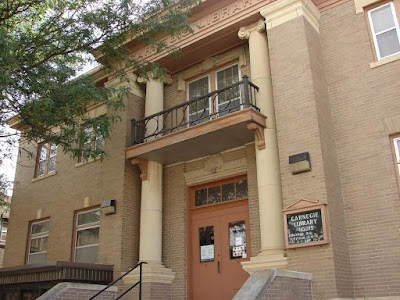 I love the old, creaky Carnegie Library downtown. It's one of only 30-odd Carnegie Libraries in the U.S. still used as a library. The sinister top floor spawned "In the Primal Library". I've also used it as a setting in my YA WIP (crying out to be edited and revised), Borrowed Saints.
There's more, of course. Hell, the whole town of Clay Center has become my fictional Springdale (setting of The House Eaters and several stories). It's not the most original location, but it's mine. I'll keep on squeezing as long as she has something to give.
Posted by Aaron Polson at 10:55 AM

Email ThisBlogThis!Share to TwitterShare to FacebookShare to Pinterest
Labels: Bottom Feeders, Carnegie Library, In the Primal Library, inspiration, Spider and I, The House Eaters, WIP Wednesday

Excuse me if I start to drool a little over the library. My poor little hometown didn't have a library. I had to drive like 30 miles to the nearest one. I was so deprived.

Oh man, my home town is so cute and suburban. Not that I let that stop me ; )

nice to put some pictures to your settings, although they looked different in my mind.

Did you post that factory picture once? Or am I imagining that? My mother objects to my use of our local park as the playground for the apocalypse. I told her to get over it.

Last week, I had the idea to take a camera with me the enxt time I visited my parents and write a blog post in which I explained how some of the sites of my childhood and teen years inspired some of my harrowing stories.

Eh, I'll just wait a few months and pretend I forgot that you posted this.

(Very cool post, all jokes aside. I love hearing/seeing where story ideas come from).

Cool pictures! I mine my hometown for settings sometimes too even though the town itself is not creepy at all. My memories have overlaid creepiness on a lot of it, though, like the garage where that guy who killed those two girls lived, and the street where there was supposed to be ghosts. Great story fodder.

I'll always have a warm place in my heart for the Clay Center library since it introduced me to Ray Bradbury as a kid.

Like the library. Dwarf's ours. It doesn't have a creaky or sinister top floor. A bit of a snore, honestly. *sigh*

Andrea - I had the locations of my favorite books memorized. Great times in that old place.

Natalie - All the better to lay waste to, right?

Jamie - I'm glad they look different in your mind. I wouldn't want the Clay Center chamber of commerce coming for my head.

Cate - I did. I should post a side by side now so you can see how the landscape changed. It was weird to see an empty place where once stood a five story brick building.

Barry - I think it's a common thread among a number of writers. I'm perpetually stuck in my teen years.

K.C. - Clay Center can look creepy, but nothing really creepy ever happened there. Funny, huh?

Ken - I thought of you and your Dad this weekend - a pipeline from Alaska to Texas is going down just east of town. Always good to hear from you.

Becca - It's that fabulous Andrew Carnegie. The Carnegie Library here in Lawrence has long since been retired. They won't even let anyone in the place anymore. *sigh*

I'm currently in my hometown, but alas, I forgot my camera. I wanted to take pictures because it inspired the carnivorous, murderous desert in my novel.

It's strange to come back and see that some of the places aren't as scary as they used to be. The fences aren't as high, the lawns aren't as expansive. But there are other places that will probably frighten me until the end of time. Delightful shudders, those!

I think we can continue to squeeze blood endlessly from those stones, really. Maybe we couldn't stay in our respective podunk towns endlessly-- but even that seems a lot less harrowing fate these days, yeah?

Mercedes - You have a way of making even murderous deserts sound beautiful.

Katey - So true. After this latest trip, I was re-inspired to attempt a semi-experimental novel set in a similar town. Bleed baby, bleed.

I love that you use your hometown as the basis for your stories. And I agree, its a gorgeous library. Ours is one of those fancy new modern things that really is quite ugly. Our local council is not overly big on preserving history.