PARSEC Ink has put together another magnificent collection of short, speculative fiction, and I'm beyond honored to have a story included in its august pages. 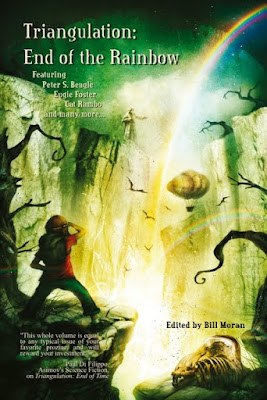 I received my contributor's copy of Triangulation: End of the Rainbow yesterday and skimmed a bit. Read a few stories. Read my story, "The World in Rubber, Soft and Malleable" again...and damn it, my own story made me get all choked up. Coupled with the afterword by editor Bill Moran, I was almost in tears.

By Zeus, I hope not. But Mr. Moran lays out a pretty powerful argument for why it is. (Let's just say Transformers 2 was not his favorite movie...) Me? I blame the internet. For all it's wonder and fantasy, it has made fiction cheap and easy. Cheaper than pulp stories. Hell, authors writing for pulp mags back in the Golden Age were paid near living wages for their words. Now, that kind of pay just isn't feasible (without massive debts) even for the best mags. I'd be shocked if any of them are turning profit. I'd be thrilled if they were.

Yes, YA novels are selling like crazy. And yes, some of them are wonderful. Okay, a few of them are wonderful. There's a ton of shite out there, though. Trust me. I work with teenagers. I see the kind of crap they grab at the library. I try to cultivate a love for good fiction, but it's a grueling, uphill battle. They have a million and one distractions: mindless movies, Youtube, text-messaging, Facebook...

Too many other choices for how to spend their copious leisure time to demand quality fiction. If the readers don't demand it, don't vote with their dollars, who is going to care?

If fiction dies, is the art of storytelling far behind? Is there anything more human than storytelling?

Man, I'll rage against the dying of that particular light. Rage hard, even if it kills me. I'm going to write, and write hard. Yeah, I'm back from the strange doorway in my basement.

"The colors through that door shamed anything the Krylon people could imagine. Shattered the rainbow, too."

Buy a copy of Triangulation: End of the Rainbow. Help fight the good fight. Win one for stories and good fiction in an era of paste-pudding and drivel.
Posted by Aaron Polson at 8:11 AM

Email ThisBlogThis!Share to TwitterShare to FacebookShare to Pinterest
Labels: Publication, rant, thoughts on writing, Triangulation: End of the Rainbow

I didn't read the same material in H.S. that I do now. All we can hope is that this generation grows up and starts to learn the difference between quality and muck and is drawn to the quality. The art of the story won't die, it may just take a slightly different form-- I hope.

Congratulations on your story being in the anthology.

I don't know if I would agree or not. I read, my mom reads, my sisters read, my kids read, and you know what, no one reads the same things or has the same interpretation of what they read.

Fiction may be cheap and easy, but not always. How long did you spend on your story? Hours? Days? Weeks? Those whose taste run to speculative fiction will appreciate all of your work. If they did not like it, they would not buy it. You know what your work is worth.

Something are always worth working for, even if you don't see monetary rewards immediately. That is why we keep writing. Or at least I do.

This seems to be a common theme around the internet these past few weeks. It's terrifying, in a way. Not just for the primary reasons either...it's scary because it makes me appreciate Twilight in an odd way...anything to keep kids reading, I suppose.

I blame corporatism. As soon as you have to make a return every quarter regardless of the business environment, you lose the option of cultivating talent or markets over a long-term, and you lose the ability to inject really cool artistic works into the world. That's the core ideal behind the Bruckheimer-ization of literature, and why none of us can sell stories outside of the small presses.

But, you're absolutely right: I'd rather my kids read Vampirates Book IX than never read or listen to music, full stop.

Congratulations-- it looks beautiful and is definitely on my list for the next spree.

I have a knee-jerk reaction to alarmist pronouncements, and that is always: "Bullshit." They get people talking, they sell newspapers, they get people to watch the news. But they're so rarely the truth.

Yeah, fiction is cheaper and easier to find, and it's easier to find crap than ever. But there has always been crap fiction that gained undue popularity, and always will be. And there have always been dark horses that pull out in front or niche fiction that finds its place and shines there. Just because it gets there in a way slightly different from the past 500 years doesn't mean it won't happen.

More information cannot be a bad thing. Hell, at this rate, we might even figure out democracy some day.

Boo, on mediocre fiction. I try not to look too hard at the YA section when I go to the bookstore. Some of it scares me.

It's a matter of supply and demand. I think that's why POD is doing so well. No more books returned for non-sale. If we can just get people reading again . . . people demanding quality lit and genre.

Also, congrats on your published story!

I'm soooooo jealous that you already have your copy. Oh and I'm sure I'll tear up when I read your story again. It's my all time favourite (I may have said that before).

Jamie - Hope is the thing with wings, right?

Shadow - It's not about being paid, it's about the lack of mountain tops from which to shout. I'm sure that made no sense at all.

Barry - The times they are a'changing. To quote another musician, "these changes aren't permanant...but change is"

Jeremy - Our eyes are too focused on turning profit now instead of building a temple for the future.

Katey - I knew you'd talk me out of whatever gloom and/or doom I was feeling. Sometimes I'm too much in the panic of "now".

Natalie - The stuffed literary characters with fuzzy hair scare me.

Bobbie - And I think POD is the secret weapon of the small press. Now to conquer marketing. (easier said than done)

Cate - I'm pretty sure it's on my list of favorites, too. (and it's a semi-biographical piece, in a way...more than usual at least)

Congrats on the publication!

I certainly hope fiction writing isn't dying. I'm not ready to let go! In all seriousness, it'll be folks like us who keep it alive.

Aaron,
Hello from a fellow English teacher and Triangulation author. Sometime we'll have to trade notes on the best books for teen readers.
-Amy