All of My Fingers...All of My Toes

No major injuries this year during our Fourth of July festivities. (Long time readers will remember several burns sustained last year.) So whew. I'm thankful for that.

After a slew of rejections this weekend (and a few from short-listed stories), I've put the old editing nose to the grindstone, hoping to find my stride in this "summer of slack". Unfortunately, I sort of feel like this guy... 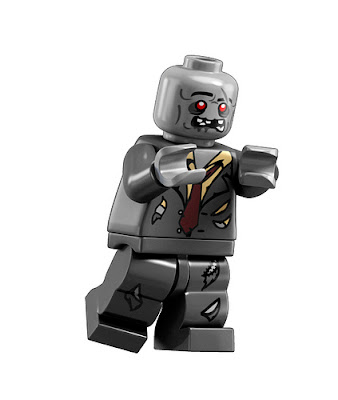 ...when I'm trying to write. There are some ideas in my head, I'm sure. Now to tease them out.

Speaking of the cuter-than-a-puppy Lego zombie, I'll have one to give away with other magnificent prizes when Loathsome, Dark, and Deep is released later this year (or early next). Good times, folks. Good times.
Posted by Aaron Polson at 5:23 PM

Glad to hear that all the digits are still intact after the festivities. That was a cool video, BTW, from Friday. Should have been on TV.

Glad to hear you escaped uninjured and as for the rejections, fingers crossed for acceptance elsewhere.

Rejections should be banned until we're all in a more productive mood.

Hope the writing/editing picks up for you soon. I'm swimming against the tide too so I know how you feel.

You're right, that Lego zombie is cuter than a puppy! Sorry to hear about all the rejections. At least you're still plugging away. Me, I'd roll over and go back to bed. Maybe that's why I don't try very hard. I'm afraid of the rejections. So kudos to you for still trying. And writing is easier, I hear, with all digits intact.

Fingers crossed on the short lists. It sounds like you're having a great summer, rejections or no :D

Danielle - Rejection is part of the game, isn't it?

Natalie - Mostly. My sanity is suspect.

Cate - They certainly don't help with the motivation.

Michael - At least you have the needles to blame. ;)

Cathy - Even the pinkies are important. I hit "Enter" a lot.

Katey - Yes, summer has been pretty darn kind to me. True.

Just remember, every rejection is a step nearer to getting published; all respected authors have their fair share. :)

oof, those short-listed rejects are the worst. I've had more and more stories short listed lately (a good sign) only to be rejected (a not so good sign).

Rejections are always a bummer but unfortunately it is part of the game.

No collection is complete without a Lego zombie (of course, I'm not speaking from personal experience).