I'm chugging away on a "secret project" involving a man who wears his dead wife's teeth as a necklace. Don't worry--he didn't kill her. More later. Promise.
The second is a short story (on which I should slap "The End" today) called "Crushing on Mr. Nose":
Before first hour on the second day of school, Mr. Lutz picked his nose in the darkened office at the back of the classroom. Mandi Ferris and Libby Jenkins watched the whole, ugly affair. A new teacher at South, Lutz wore an ill-fitting button-down shirt—which did not flatter his bulging midsection—and brown plastic rimmed glasses which Mandi was sure, absolutely positive, her grandfather had donated in the cardboard box marked “charity” at the optometrist’s office. Lutz’s skin rivaled a potato worm in paleness—white and soft looking like the underbelly of a catfish Libby’s uncle made her touch during a camping trip when she was five. Her uncle was a freak that way.
Mr. Lutz was a freak in a different way.
“The worst part, absolute worst,” Libby said, scowling as though she’d eaten a fistful of raw lemon grass, “Is that the weird bastard lives across the alley from me.”
Mandi’s pug nose wrinkled. “Oh. My God. He’s probably some kind of perv. Probably watches you in the shower. Lutz butts. Let’s call him Mr. Nose.” 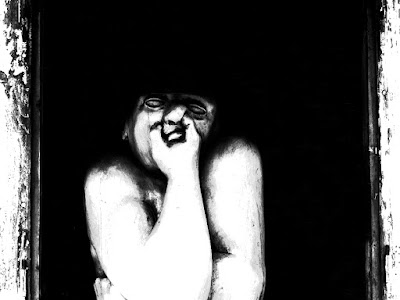 Try to get that image out of your head, eh? Libby certainly can't. (She even starts to scribble "Libby Lutz" in the margins of her notebook...WTF, right?)

WTF Indeed. Yes, thanks for the image. ; ) What's its title? Nobody Nose the Troubles I've Seen? Stop Picking on Me?

Argh! Just heading out of my edit cave and your words make me want to crawl back and fix, fix, fix. So much beautiful (erm...) imagery in such a small space.

Cathy - Libby won't be laughing by the end. Oh no.

Becca - You're welcome. ;) (the art is called "Morka Gora" by someone going by "Nervoir" on a CC site; I prefer Stop Picking on Me)

Cate - Beautiful? It's a special day for scary-beautiful.

I can see how this one might ramp up the revulsion for you. I think it's fabulous! Hee!

Ugh...I know how Cate feels. One of the reasons why I try not to read while I'm editing.

Teeth are my Eeek! button. I stomach anything to do with human teeth.

That's some wicked dialogue betweent the two girls. Cool. Make sure there are no witnesses next time you pick in class.

Am I the only one with "Hot for Teacher" stuck in my head?

Andrea - You should read The Tenant by Ronald Topor. Creepiest teeth bit ever.

Alan - Can you imagine what I hear in the hallways every day? I'll keep my, er, "nose clean".

Oooh, I love the dead wife's teeth as a necklace idea. Can't wait to hear where that goes.