I did a little house cleaning this week. Exciting times. From a September 1986 Weekly Reader...Giant Sharks, Soviet Circus Couples, and a Rambo reference... 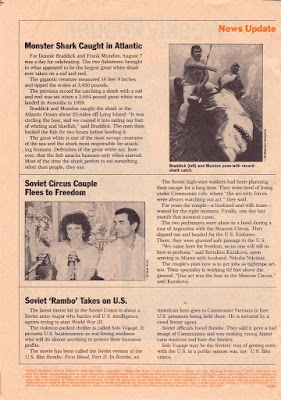 Man, how time flies. I was eleven when I read those articles for the first time. My students weren't alive when the Soviet Union was a country. But giant sharks...giant sharks are still scary as hell. (click the picture to enlarge and read if you're so inclined)
And a tiny bit o' fiction (a once-upon-a-time accepted story who lost its market):
"Busted"
Victor arrived home from the adult learning center with a sculpted bust.

“What’s that supposed to be?” His wife pointed and sneered.

She laughed. His face blushed red, and he thought of cracking her with the sculpture.

Later, when he learned of her infidelity with the UPS man, she laughed louder.

He blushed again, but this time, he smashed her skull with the bust of Frankenstein’s Monster.

She lay on floor, arms splayed, lifeless. To hide the body, he thought, I’ll do like Frankenstein with the monster, only backwards. He shuffled to his shop for a saw.
Have a lovely weekend.
Posted by Aaron Polson at 9:56 AM

Mercedes - If you use the right bait...

You don't hear enough about giant sharks these days.

That reminds me. I need to go fishing sometime soon. Have a great week and you can't use my saws. I don't care how nicely you ask.

It had me grinning.

Hahaha oh wow. Nothing like a little Dr. F action in reverse, huh?

Jamie - Awww...Hope you don't find any sharks in Iowa. That would be scary.

Katey - I like how you deemed it "Dr. F action". I think there's a piece of flash fiction in that.

Perhaps giant sharks will soon be the 'pale teen vampires' of the past couple of years. '86, I remember it like yesterday (not).

Ahh, that makes me want to watch Jaws again.