I wrote more than 3,000 words yesterday--the first 3K day I've had in nearly a year. I also managed to finalize formatting of Barry Napier's The Final Study of Cooper M. Reid. How did I do it?

Let's just say it didn't hurt 2/3 of my students were gone to math competition. ;)

It thundered from the shadows on the other side of the bridge like a fountain of steam. Tucker’s mouth hung open as he watched, his brain spinning in broken circles like the web of a drunken spider. The train was transparent, a razor-thin sliver of pale smoke painted against the starry gap. It rattled over the bridge, first the engine and a coal car, several passenger cars, a few freight cars, the caboose. And like smoke, it dissipated at the near side, crumbling into the sky as a puff of spectral dust. 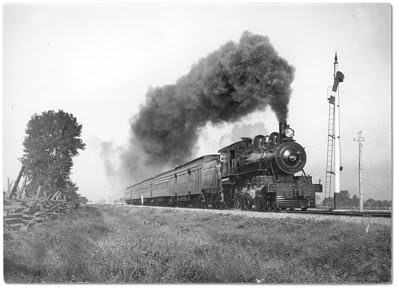 And how did I end yesterday's writing session? With this exchange between one of my protags and a mystery girl:

“The third tragedy…something awful about it. Something intelligent.”

He offered a weak smile. “Okay.”

“Something that wants you dead.”

"The train was transparent, a razor-thin sliver of pale smoke painted against the starry gap..And like smoke, it dissipated at the near side, crumbling into the sky as a puff of spectral dust."

Sounds fantastic! And brilliant ending to Act I.

Mary - I had to leave something hanging over his head, right?

Nothing like a mystery girl who suggests something that wants you dead, is there? That is awesome.

Congratulations on both the word count and the formatting. Nice when the school is obliging like that, isn't it?

I need your magic clock that can apparently freeze time and allow you to get stuff done...

Sounds like you had a very productive day Aaron, and you've got some great descriptions in your little blurb. I loved the way you used your words to tell of the train.

Keep up the crazy output!

Your words make me want to write... and to write better. Congrats on the awesome word count day.

Barry - What you need is a magic eraser button that makes 2/3 of your workload vanish.

Cate - Thanks. I like days when the words just flow.

Wait, so math is good for something? I always assumed my teachers were lying.

Very productive! I don't think I've ever managed 3K in one day. Then again, I write by hand. It would take almost all day to write that much.

Last thing anyone wants to hear is someone telling you there's something that wants you dead. It's not good for business. Excellent ending to Act I!

Andrea - Writing by hand would kill me. Sometimes, I try a sentence three or four ways before I get it right.