He woke from the dream and immediately rolled over to find her, but she was gone. His hand found damp sheets and a soaked mattress.

"Molly?" His heart thrum-thrummed in his chest, and he feared the silent house would be the only answer.

"In the kitchen," she called.

He hopped from the bed, nearly skidding into the wall when his socks slipped on the hardwood. She was there, standing at the kitchen window, her white arms folded across her chest.

"I had a dream." He reached out and touched her shoulder. His eyes sank to the puddle on the floor at her feet. "I was worried about this."

Her eyes, walnut brown so dark they often looked black, stayed on the window. "Nothing's melting out there."

He pulled his hand back. He'd expected a puff of frost as she spoke, but nothing. His mouth opened and closed while he tried to find the right words. "Look--don't go. I'll turn off the heat. Wear my coat. Just--just don't leave me, okay?" 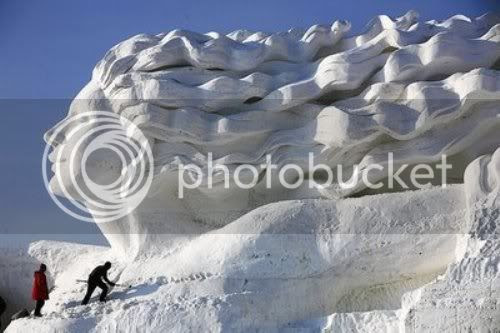 That, sir, was awesome.

I am truly enjoying your flash fridays. Each one gets better and better!

That was so romantic : )
I might have to go punch something now, or at least drink a beer.

I loved this. And the snow woman picture is just breathtaking.

Man, you need to gather all these together and get someone to put them out there. That one was just gorgeous.