No school today (yippee!). More below.

I'm a geek for word origins (etymology). In follow up to yesterday's post, I started thinking about the words commission and submission. As a writer, I've had exactly one commission. It was nice, my highest per word rate to date (a whopping 2 cents a word). Granted, as a piece of flash, it was only 1000 words (so I earned 20 bucks). Whoot.

Everything else has been via submission. Different world...and more competition.

Basically, the difference lies in the those two words: commission and submission. A commission is an assignment (from words meaning commit and mission); an editor/publisher comes to the writer and requests something. The writer writes to specifications. Hit it big enough, the door will open for a writer to receive more commissions. The pay rate is generally higher (from what I've learned) because the editor is trying to sell the idea to the writer. Supply (the work from that particular writer) is limited.

In the more typical submission model, the writer is trying to sell to the editor. Submission traces its history through Late Middle English and Latin, once upon a time carrying the denotation a letting down. When a writer submits, they take a lesser role. They join the horde trying to squeeze through the door. Understandably, the pay rates are going to be less. (Um, remember supply and demand...more stories=less pay for stories)

Ironically, submission requires an author to be on their 'A' game. There is a horde at the door, and even the worst FTL markets reject work occasionally, regardless of what other POVs may suggest. (You can't bank on Duotrope for accurate numbers, that's for sure...I'm not accepting 50+% of subs to 52 Stitches...no where near that, in fact) Competition brings out the best (and worst). Competition makes those at the top better. It does. (there are downsides to competition, but I'll reserve those for a later discussion)

Maybe, when a writer becomes good enough to garner commissions on a regular basis, it's because all those submissions did their job. Maybe a writer gets better through competition, first at the little mags, growing stronger and making better sales. It doesn't have to be every writers' journey, but it's a legitimate path...every bit as legit as landing a bestseller and then writing sub-par work on commission (as some "pros" invariably do). Pro writing isn't a clear line on the playground; if it was, as I said yesterday, everyone would eventually cross that line. Writing, like all art, will always be subjective.

...so, rant over. Like a said, snow day today. I should say "ice" day because there just isn't much snow. (see the picture from my front door) 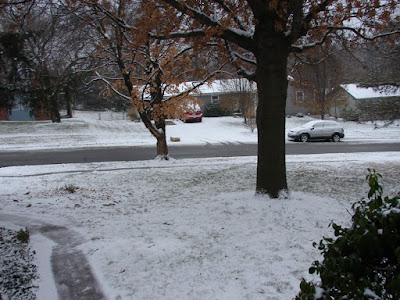 But...the ice continues to fall. Ice is dangerous, I 'spose, and I do teach in a rural district. So I'm off to write our family Christmas letter. My wife, luv ya, thinks this should be easy because "I'm a writer". Har. I don't think any of my weird, dark magical realism, horror-fantasy will work in the letter.

If you're still reading, and I salute you if you are, you can roll over to Flashes in the Dark and read "Bleeding the Trees". I wrote it for Northern Haunts (talk about competition...didn't I know other people would write about maple trees?), and then sold it to another market which subsequently folded. As I've said before, I don't really mind giving away flash. Sorry.

Email ThisBlogThis!Share to TwitterShare to FacebookShare to Pinterest
Labels: Flashes in the Dark, rant, Snow, the business, thoughts on writing

Ice storms can be fun, if your idea of fun is reckless abandon. Best one I remember is 1991. Ford Festiva + 3 inches of ice = good times.

There may be just ice there, but here there is about 6 inches of snow, and it's still falling.

Commission and submission never fail to reboke fear in all people participating in the fine arts. No matter how hard you try to tell yourself your work is good, and somebody will like it, there are always flaws. And they are even more apparent when you get rejected, may it be in one form or another.

Jamie - I saw a poor chump in a "smart car" this moring. How he's going to regret that purchase when an SUV slides into him.

Nope, never been commissioned. I've had a few editors wanting to see more of my work for a particular anthology after they accepted my initial story--with no guarantees on the follow up piece, mind you.

Yup, I'm pretty sure my kiddos won't have school tomorrow. Bring on the snow . . . ice, not so much.

Have fun on your day off!

That didn't feel like a rant at all, more an observation. I've only had about 3 commissions and don't expect to ever leave submission land.

The words "flash slut" are branding themselves into my brain at the moment. Why do you make me think such things? I try so hard to have only pure thoughts.

Elena - It definately doens't make it any easier.

Never been commissioned either. And the thought of a day off is very appealing. Bring on the holidays.

Oh you midwesteners. That picture reminds me of an episode of King of the Hill when a few flurries of snow start falling and everyone begins freaking out, driving cars into trees, etc. Here on the east coast with ice, schools might have a two hour delay at the moment. Oh well.

Danielle - I can't imagine the weather you have this time of year.

Robert - Hey man, I don't call off school...I just enjoy the vacation. ;) Isn't King of the Hill set in Texas? Those fools really don't know what to do with snow. (passing that one on down the line)

I don't know-- I think it would make Christmas letters more fun if they were injected with a bit of dark fantasy.

But I'm awfully weird. And it wouldn't be very festive, let's face it.

Too true about commission and submission. I suppose a commission means you've crossed that line with the commissioner, at least-- that person has faith in your storytelling. (And a project in mind. And the drive to actually do it/get it published/whatever.)

I've only just had my second one, personally, and I can't help thinking they're flukes. I think the "invitation to submit" is pretty badass, too.