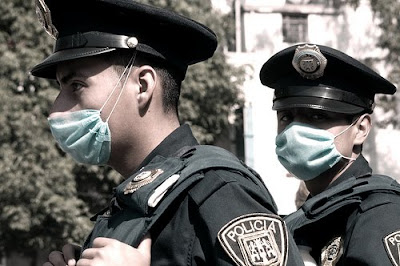 What nameless disease are these members of the Policia hiding from? Danger is vital to good fiction, regardless of the genre. Even literary tales have a solid dose, whether it be the threat of physical harm or more subtle dangers (living outside one's social circle, trying a new career...etc.).

My WIP? I finished another story (now I have two in the revision que). "_____" (insert story name here) is about a pair of mismatched friends growing up in a small town about to be flooded by an Army Corps of Engineers reservoir project. "Creatures" in the woods and the soon-to-be flooded river haunt one, while the other must deal with his shiftless, alcoholic father.

The grasshopper worked its thick hind legs, fighting in Johnny’s grasp. Its mouthparts massaged a drop of brown sludge, trying to smear the offending liquid on the boy’s fingers, a defense mechanism the boys called “chewing tobacco”—a stain the insects would leave behind on their human captors. Johnny thought of the hook, the sharp, sun-sparkling barb pushing through the mottled green of the insect’s thorax. He imagined the strong legs kicking in the water as the grasshopper drowned, lost in the black water, and he felt the fear in his throat.

Perhaps all the NaNo talk out there has inspired me. I've started laying the brickwork (i.e., backstory) for a new book, a haunted house tale which I hope takes a different angle from what's come before. Time will tell.

In the meantime, I leave you with danger.
Posted by Aaron Polson at 5:47 AM

Danger is good, so was your clip. thanks for sharing and reminding us of this important piece of the puzzle.

Damn, that's a good snippet you left us with. The idea is fascinating too, especially considering I live a few miles from a lake created in the 1930s by TVA damming the river.

I love danger! Er, for my characters, anyway. Currently my MC can't stay where she is or she'll be arrested (For Something She Didn't Do!) and she can't leave or she'll be taken to do a task she knows she can't complete, upon penalty of DEATH. Muahahaha!

Jamie - Each day I write one of these, my brain starts filling in the blank for my as of yet unstarted novel.

K.C. - Milford Lake (the largest man-made lake in KS), was about 10 miles from my hometown. Part of the lake covered the "old" towns of Wakefield, Broughton, Milford, and Randolph. I kept thinking about those old buildings underwater, the ghosts that could be trapped there...

You've really put your MC in a tough spot. Awesome.

Villages / towns lost beneath lakes always seem so haunting. I'm sure you'll do a fantastic job.

Ah, yes, danger is totally essential to every story. Love your writing. :)

Now all I can think about is dangerous humping, which on a planet full of cows brings awful, awful images to mind.

Verily, I am the worst thing to ever happen to Sci-fi.

Elana - Thanks. When I waffle, I add danger. Sometimes I forget the power of peril.

Natalie - Max (the three year old) loves cows. I wouln't tell him about your comment. ;)

Grasshoppers give me the horrors.

Dainelle - we have some monstrous ones in Kansas.

Mmm danger is the best. A new haunted house book, huh? That sounds like fun-- keep up updated!

Loved the snippet, too. Really got a gut reaction from me, and just with one little paragraph. That is how it's done, my friends!