What I Owe Boris Karloff

As a senior in high school during the fall of 1992, I purchased a copy of Frankenstein (1931) on VHS. I was on an extending field trip (3 days and 2 nights), and didn't watch the film until returning home. I'd grown up with the monster series from Crestwood Studios, but had never seen the film.

I have always been a fan of dark things. Even though doing so brought nightmares, I watched Nightmare on Elm Street and Friday the 13th with my neighbors, the Sullivans. We played silly games in the basement, games designed to terrify each other. They had a collection of old copies of Fangoria and Famous Monsters of Filmland.

But I hadn't actually seen Karloff in action until I was 17.

Elm Street and Friday the 13th weren't my style. Too much gore. Too little introspection. (Yeah, I was as goofy as a young kid as I am now) But the Monster...under all that make-up, Karloff pulled off pain and longing and betrayal and confusion and...

There's more, of course, and part of Karloff's story should be an inspiration to anyone working to make a go of his/her dream. The man made dozens of films and worked as a stage actor before Frankenstein, but work was never consistent. He filled the gaps with manual labor, digging ditches and driving a cement truck. Times were tough, and Karloff quite lean at 44 when the Monster was unleashed in 1931's Frankenstein.

The inspiration? Don't quit. Don't give up. Keep plugging away even when the dream is impossible.

Thanks Mr. Karloff. Thanks for bringning the monster to life. Thanks for inspiring my love for the weird and gothic, and my continuing affair with Mary Shelley's hideous progeny. Most of all, thanks for all the hard work.

NaNoWriMos, as you near the end of the month, keep going. 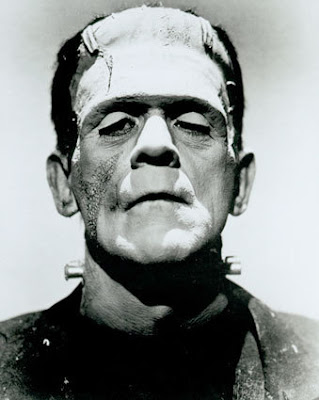 Thanks, again, for the pep talk, sir.

Thanks for sharing the monster today.

I hated the Nightmare movies, I watched one when I was 17 or so and almost vomited. Too gross.

Cate - Even the Nightmare commercials gave me nightmares. I used to run up the stairs for fear they'd grab me.

Ah, this takes me back! Not to 1931, mind, I'm not that old! In the 1970s, ihen I was in my pre-teens, my mum would let me stay up late to watch 'Appointment with Fear', a Friday night slot for all the old horror movies from Hammer and Universal. Karloff, Chaney Jr, Cushing, Lee and PRice...these guys were my heroes.

I go both ways. I like my angst blood soaked : )

You can't beat the classics, and his story really is inspirational. (Wow, he actually worked through the tough times instead of giving up. Unimaginable.)

Michael - Give me a marathon of Hammer/Universal horror, and I'm happy as a clam. I've never understood how happy clams could be, but I'd be one.

Natalie - Nice. There's definately a market for that.

Jamie - I know. Work. Can you imagine one of today's actors stepping up to that plate?