A word of caution...this one isn't for the kids. 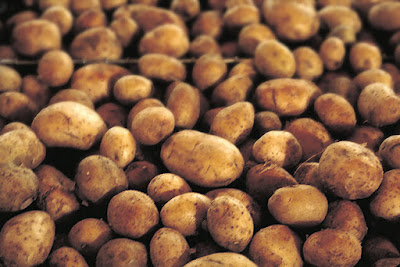 John Wilton found himself in his sun porch clutching the handle of a stirrup hoe. Rain had soaked the yard for the past few days, and he knew—following Karen’s example—that the garden would need a good weeding. It was her garden, suggested by her therapist, a hobby to occupy her troubled mind—something living to help her forget the baby.

But Karen didn’t forget. With her in the hospital, he was left with the house and the garden to tend, alone.

He took the hoe in both hands and began at one end of the plot. With steady thrusts, he pushed the blade into the topsoil and raked it clean of small green weeds and stray grass. John took care around the base of each tomato plant. With a surgeon’s precision he worked the dirt down the rows of lettuce. An earthworm, close to the surface after the rains, accidently came in the path of the hoe and was split in two. John smiled as each segment wriggled away into the ground.

He came to the potatoes and paused.

The dirt swelled at the base of each plant. Karen made neat mounds to encourage growth, covering the fledgling potatoes to urge them higher, to make more room for the tubers. In the center of each mound, a plant thrust toward the sky—in the center of all but one.

Little miracles, she had called the potatoes. They grow in secret, underground. Dig the potatoes up once the plants have died.

John laid the hoe at the edge of the garden and knelt near the odd hill of dirt. He brushed away the top layer of soil, the layer dried by the sun, and found wet, dark mud beneath. The rains had saturated everything. Close to the ground, the heavy, earthy scent hung in his nostrils. He pushed his fingers under the surface.

Just a little at first. Then more.

His index finger struck something smooth. Not too firm.

John’s face crept into a smile. No plant. Karen was right. He dug into the hill with both hands, letting the pungency of good, dark mud fill his senses.

They’re my babies, she had said on his last visit to the hospital.

With the dirt cleared away, he saw the skin of the thing, a light tan, almost flesh-tone with a hint of pink. He glanced at his mud-marred hands, but something tugged at his vision, pulling his gaze back to the hole at his feet.

The thing moved. Pulled away deeper into the ground, twisting like a thick earthworm. John’s throat tightened, squeezed by invisible fingers.

Too thick…couldn’t be a worm.

As thick as a baby’s leg.

John lurched back, sickened by the sight of the pale skin working in the ground, kicking back and forth. He staggered to his feet, stooped for the hoe, and swallowed a breath as the blade snapped to the hole, cutting into pale, twitching flesh. He struck again and again until the small hole filled with blood, dark as the soil.

"Tending the Garden" sat in my "WIP" folder longer than I care to remember.
Posted by Aaron Polson at 7:30 AM

Eek! Thanks for the warning. At I read it post-lunch.


An earthworm, close to the surface after the rains, accidently came in the path of the hoe and was split in two. John smiled as each segment wriggled away into the ground.

This left me wondering what would happen if you cut a person in two and the two halves wriggled off... My mind is going to be whirling on the way home.

Then the words have done their job, Cate.

Excellent story, Aaron. I will be creeped out all weekend. I especially liked the following as I think it implies 'more':

"The dirt swelled at the base of each plant. Karen made neat mounds to encourage growth, covering the fledgling potatoes to urge them higher, to make more room for the tubers. In the center of each mound, a plant thrust toward the sky—in the center of all but one."

Wow - incredibly unnerving! That final paragraph is a doozy ~shudders~

Thanks, Alan. Anytime you have a "but one" moment...there's always a chance for "more." ;)

Mary - thanks. I try to tone back the blood 'n' guts until the right moment.

Very chilling, definitely one to disturb my sleep.

Thanks for visiting, Cathryn...hope it wasn't too disturbing...

Ooh, awesome and perfectly creepy! I love the imagery of the dirt mixing with blood. *shudders*

I loved it. Although I sort of had a sneaky suspicion of the outcome from the end of the third paragraph. But that's no criticism of your writing, it's just the way my mind works: I'm always looking for that 'Stephen King' moment!!
I thought it was an excellent story.

Very disturbing, in a good way.

Katey - I always knew something was up with those dolls...

Akasha - I kind of always have a Stephen King moment or two up my sleeve.

Danielle - I'll always try to shoot for the "good" kind of disturbing. ;)

This is a fantastic short! I wish I could write something so creepy.

Oh, Natalie. You do. All the time. I still shudder at mushrooms. ;)