WIP Wenesday: The Back to School Edition

Yes...school. For those of you that grumble about teachers having 2 1/2 months off every year (at least here in the U.S.), I'll just tell you what the PE teachers say to me when I complain about them wearing sweats every day: you picked your major (or career, in this case).
I'd still like to wear sweats every day and teach English. That would be comfy.
Anyway, I'm at 32.5K with Loathsome. I think there's at least another 20-25K of story, plus at least 5K worth of additions to the first half. I'm not a "write too much and cut" scribbler. I'm an "underwrite and fill in" scribbler. Plenty of reversals, betrayals, and horrors have yet to be written. (Bwahaha...ala Katey) 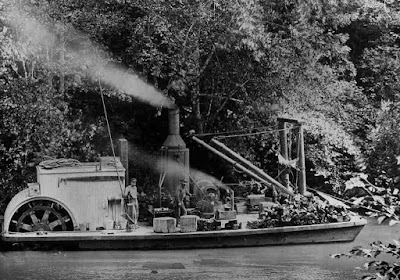 I snatched the lantern from Olson’s hand. The flame guttered through the broken glass as I swept the light in front of me. Pushing away from the other men, I worked along the side of the bunkhouse until I found the entrance. The door gave with little push, and the air behind me filled with the mutters from the others.
Inside, my light swept across the room, chasing the inky shadows into corners like frightened rodents. I stepped onto the rough floor—dirt, of course, but less packed than either of the stations we’d met on the way. The rest of the building was empty.
“No sign of a soul, living or dead,” Olson said.
Jim knelt with his lantern and studied the scuff marks of others’ boots on the ground. “Been gone for a while. Not a sign of anyone.” He let a small quantity of dirt tumble through his open fingers. “I’d say no one had been here for months.”
Yeah, that's right. They made it upriver (five of the original seven, anyway), only to discover that nobody's home. (cue thunder)
Posted by Aaron Polson at 6:51 AM

I am so glad I am not the only under writer in the group. That picture sure brings up a lot of ideas. Thanks for the tease and have fun in school (pardon me a cruel chuckle.)

Damn, I haven't even put any applications yet. I'm way too lax about my career...

I'm an under-writer *and* an over-writer. I write too much of the wrong stuff that I have to cut, then fill back in with relevant info.

Onipar... - we start in mid-August around here...out East, could be later.

Oooh, you spoke the dreaded word: school. But great snippet!

I'm an underwriter too - woot!

I didn't choose a major, or go to uni, or have the nerve to be a teacher (I saw too many destroyed during my tentative years) so can I complain about the 2 1/2 months? Actually in the UK teachers only get about 6 weeks in the summer.

Elana...ah, school. At the beginning of the summer, I don't know what to do with myself. By mid-August, I'm thrilled with summer and have to go back.

Cate - of course you can complain. I'm not sure why I do it (it sure isn't for my health).

I'm with you and Jamie. Underwrite so you know where to fill in, rather than go over and have to cut!

Man, I envy your wordcount. And the words. :)

Matt - my first "novel" (I shudder to even call it such a thing) was bloated and ridiculous. I've cut 25K (a novella in itself) and it is still bloated.

I'm an underwrite and fill in scribbler as well and happy to know there are others out there.

Thanks for sharing more of that, Aaron. And the gym teacher business...I recall in Jr. High that we had an english teacher who regularly taught in his sweats. He was primarily the gym teacher, but english was his "other subject" as is usually the case with gym teachers. Perhaps you could work out a work-share program with the gym teacher.

I wish I could be an underwriter. I have been known to write two sentences, study them for about half an hour and then end up changing two words.

Evil laughs and ominous thunder! Dude, with every snippet I get more and more interested-- your evil plans for world domination are clearly taking effect.

The other thing people don't realize about teachers and their 2 and 1/2 month holiday: you don't get paid for it. They just spread the checks out. So wrong.