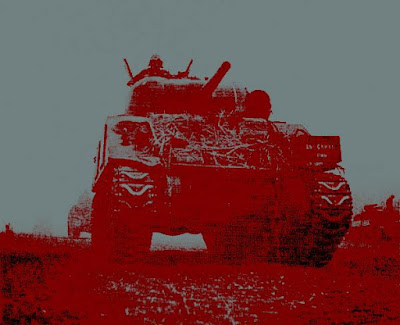 September, 1944. Somewhere in France. A lone M4A1 Sherman clanks into a clearing, the turret and pushed above a heavy morning mist. On the side of the tank, painted in awkward white letters, “Beezle’s Boys” stands out against the olive drab hull.

“We’re lost, I tell ya,” grumbles the gunner.

“Go stuff yourself,” the driver mutters. “The rest of the platoon was just here.”

The commander chances a peek out of the top hatch, and he doesn’t like what he finds. The ground is red, as red as clean sheets soaked in blood. The mist dissipates and reforms in small skyward tendrils like smoke pouring from the cracks in the ground.

“Slow up,” he calls to the driver.

The tank slows to a putter. With another glance skyward, the commander pulls back into the turret, his last vision consisting of two log-like fingers descending to catch the tank in a pincer grip. Men tumble inside as the war-machine lurches into the air. The commander catches himself against the inner wall of the turret, his damp hands pressed against molded steel. He grasps the periscope and peers out.

Two enormous, smoldering eyes meet his. He cranks the periscope, finds chiseled cheeks in burnished red the size of Buicks, a goatee hanging like a mansion chandelier from a pointed tee-pee chin, and a mouth full of sharp teeth as big as toddlers. The metal walls of the Sherman vibrate with deep laughter as the teeth part. The commander opens his own mouth.

The men tumble again, the tank tossed inside that nightmare mouth, lost inside the black gullet of the thing.
Posted by Aaron Polson at 7:15 AM

There were a couple of really cool descriptions in that piece.

'The mist dissipates and reforms in small skyward tendrils like smoke pouring from the cracks in the ground.'

'...chiseled cheeks in burnished red the size of Buicks, a goatee hanging like a mansion chandelier from a pointed tee-pee chin, and a mouth full of sharp teeth as big as toddlers.'

Let me just say this one came to me in a dream, but I wasn't in a tank.

I love me a good war story.

Seconded on the awesome description comment. I love your Friday pieces-- it's so, so cool of you to post them here for us.

Also: Red is so effing powerful. We were just discussing that yesterday at the National Gallery. Extra cool points!

Thanks, Cate. Atmosphere makes me happy.

Katey - I love manipulating with the color of things. "clean sheets soaked in blood" sounds a bit oxymoronic at first..."clean" but "soaked in blood"? I wanted that image of blood on a white canvas. Blood is easily overdone, don'tcha think?

I do, but when used properly, oh man. One of my favorite things ever.

Wait, that sounded weird. But you know what I mean ;)

And yes, that phrase in particular is what made me say it. Hell, I don't even know that blood is necessarily dirty, which has an interesting implication all its own. Hm.

The nerd in me wonders why it is a tank platoon in the US army and a tank troop in most Commonwealth armies? Both have tank regiments that descended from old fashioned cavalry units.

Al - I have a hard enough time understanding that "cavalry" now uses tanks/helicopters. The 1st Cavalray Divison of the U.S. Army still wears a horse as part of the emblem: http://en.wikipedia.org/wiki/1st_Cavalry_Division_(United_States)

I loved the smoke pouring from the cracks in the ground. Well done, Aaron!